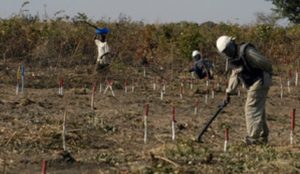 Probashbangla24 online Desk : For Imad and his sister Alia, life will never be the same after their father was killed by a landmine and they had to leave their endangered home in Yemen’s western Hodeida province.

With their house surrounded by the deadly munitions, the two children and their mother, left Al-Dunain village and headed for shelter at the Al-Waara camp in the Khokha district, some 30 kilometres (18 miles) from the town of Hays.

And it was while her husband made his way to market that he was killed on a road “riddled with landmines”.

“The Huthis then told us to either leave the house or risk being killed,” she told AFP.

The family is just one of millions caught up in a dragging war in which Huthi rebels have been fighting for more than three years against the Yemeni government, which is backed by a Saudi-led military coalition.

Rights groups say both sides have committed potential war crimes in the conflict which has killed an estimated 10,000 people, mostly civilians.

While the Saudi-led coalition has come under fire for air raids that have killed civilians, including children, in rebel-held areas, the Huthis have been accused of widespread and indiscriminate use of landmines.

Yemen is a signatory to the international Mine Ban Treaty, which came into force in 1999, and aims to eliminate landmines and clear up vast tracts of polluted land.

And indiscriminate use of landmines is deemed a war crime by international bodies.

While the Huthi rebels have made no media comments about landmines, in a letter to Human Rights Watch (HRW) in 2017 the rebel-controlled foreign ministry in Sanaa denied using landmines or having stockpiles, adding they were “vigilant in abiding by commitments” under the treaty.

But for Fartout and her children there is no way to return home, even if they tried, said her father Jamal Fartout.

“The Huthis planted landmines everywhere, and their explosives destroyed the roads,” he told AFP.

“All the roads leading back to our home are lined with explosives.”

HRW said in June that landmines in Yemen were hindering aid access and entrapping people.

“Huthi forces have repeatedly laid antipersonnel, anti-vehicle and improvised mines as they withdrew from areas in Aden, Taez, Marib and, more recently, along Yemen’s western coast,” the HRW said.

Landmines “will pose a threat to civilians long after the conflict ends,” it warned.

In July, the Washington Institute said that, while landmines have plagued Yemen for decades amid different conflicts, the Huthis are using them today “at an astonishingly high rate.”

While exact numbers are “notoriously difficult to verify”, the institute said one “Yemeni de-mining official claims the Huthis have laid 500,000 mines since 2015” while de-mining teams “have reportedly removed 300,000 landmines”.

The non-governmental Landmine and Cluster Munition Monitor recorded more than 2,100 casualties in Yemen from landmines in 2016.

“I asked the Huthis, ‘where can we go when the breadwinner of the family was killed by a landmine?’,” Fartout said.

Hundreds of people now live in make-shift tents in Al-Waara — partly funded by the United Arab Emirates (UAE), a key player in the Saudi-led coalition.

While dozens of children, some barefoot, run around the camp, one boy sits in a wheelchair — his leg in a cast. He, too, was a victim of a landmine.

According to the Norwegian Refugee Council (NRC), sustained fighting in Hays has killed civilians, destroyed infrastructure and driven mass displacement for more than 10 months.

By March 2018, an estimated 12,000 people had been displaced from the districts of Hays and Al-Jarahi, some 25 kilometres from Hays.

In June, Saudi Arabia launched a new project for landmine clearance in Yemen, but “landmines will remain a formidable challenge in the postwar era,” the Washington Institute added.

The Saudi-led coalition, which intervened in the war in 2015 to bolster Yemeni President Abedrabbo Mansour Hadi, accuses Iran of arming the Huthis with explosives and missiles.

Since 2015, some 10,000 people — mostly civilians — have been killed, but humanitarian officials say the real figures are likely much higher.

Yemen has long been the Arab world’s most impoverished country. With millions facing starvation, the Fartout family are now among the 22 million people — three quarters of the population — in need of food aid.

Each tent receives a package of food, including rice, pasta, beans, tuna, salt and sugar, he said.

But the United Nations has warned aid agencies are losing the fight against famin. AFP