Probashbangla24 online Desk : Ed Sheeran’s ÷ is the most-requested album on Amazon’s voice-activated speakers, the company has revealed.
It’s hardly surprising: The record was the UK’s best-seller last year, shifting more than 2.5 million copies.
Hit records by George Ezra, Adele and Dua Lipa also feature in the Top 50, which was released to coincide with National Album Day.
But a closer look at Alexa’s most-popular albums reveals behaviour that may concern the music industry.
When people use voice commands to stream music, they consistently ask for songs they already know, with new artists largely frozen out of the picture.
For instance, Ed Sheeran accounts for three of the top five most-requested records; while there are multiple entries in the Top 50 for stars like Taylor Swift, Bruno Mars, Little Mix, and Katy Perry.
Just eight of Alexa’s top 50 albums were released this year, and only two of those were debuts – Cardi B’s Invasion of Privacy and Anne-Marie’s Speak Your Mind.
By contrast, the Official Charts Company says 16 of this year’s best-selling albums are new releases, with three debuts in the Top 40. 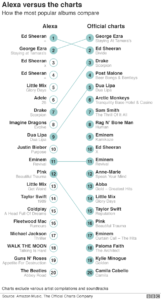 The Alexa chart highlights a known problem with voice-activated listening – that there’s a significant barrier to discovering new music.
“If you’re looking at Spotify on your phone or your computer a lot of stuff is presented to you, so you might go, ‘Oh, so-and-so’s got a new album out, I’ll give that a go'” says Mark Sutherland, editor of Music Week.
“But if all the decision-making is put upon you, and you have to tell Alexa what to choose, then inevitably you’re likely to go for tried-and-trusted, more familiar music.”
How much do smart speakers really know?
National Album Day: Why ‘albums need protecting’
Amazon Music’s head of programming, Alex Luke, acknowledged the problem at last week’s Music Week Tech Summit in London.
“It’s one of the things we’ve realised as we’ve been forging this path into voice – discovery is a challenge for unknown artists,” he said.

One of the main challenges for voice-activated discovery of new music on smart speakers is the user’s lack of knowledge about what to ask for. And let’s face it: Even if people do ask for the right thing, many speakers sadly still struggle to get that right and default to Ed, Adele or Taylor Swift – which only skews personalisation algorithms further into thinking that’s what you actually want to hear.
But it is actually personalisation that is the key to surfacing new music on smart speakers. Much like traditional radio they need to sandwich in new tracks between the classics, based on what they know you like.
The more these voice assistants know about you the more they can properly cater for your needs and preferences. We’re a little way off yet, but I’ve no doubt they’ll all crack that soon.
presentational grey line
The issue of music discovery is a big concern for record labels and musicians alike; especially as voice-activated speakers are one of the UK’s fastest-growing consumer products.
About 5 million UK adults now have a smart speaker at home, according to Ipsos Mori; while research from the US says that 90% of owners use the devices listen to music at least once a week, and they are poised to overtake mobile phones as the most common way of accessing their favourite songs.
Amazon is the market leader, with its Alexa-enabled devices accounting for about 65% of all smart speakers sold in the UK.
However, says Sutherland, “the most commonly-asked question to Alexa is ‘play music'”.
“So until Alexa evolves to the stage where she suggests things to you, instead of you suggesting things to her, it’s going to be hard to get people to say, ‘Alexa, play me this person. I’m not sure who they are or what the record is called because it’s brand new’.
“That’s an unlikely scenario in your kitchen.”
Amazon hopes to encourage listeners to try new music through its “Weekly One” feature – which promotes a new song by an emerging artist every week.
Like its rivals Spotify and Apple Music, the company also spices up popular playlists with new music; while it recently launched a feature that allows users to request “the most popular songs in Manchester” and other UK cities.
For now, though, Ed Sheeran reigns supreme. BBC