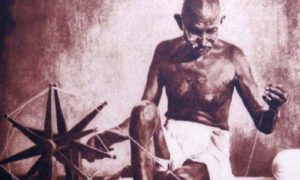 Probashbangla24 online Desk : For a man who undertook a total of 17 fasts during India’s freedom struggle (1913, 1914, 1918, 1919, 1921, 1922, 1924, 1925, twice in 1932 and 1933, 1934, 1939, 1943, 1947, 1948), his longest fast lasting 21 days, the Mahatma’s experiments with food seem as elaborate as his experiments with ahimsa and truth. In his book, Key to Health, Mohandas Karamchand Gandhi wrote, “Whilst it is true that man cannot live without air and water, the thing that nourishes the body is food. Hence the saying, food is life”.
For Gandhi, food could always be divided into three baskets – vegetarian food, “flesh-food” which included fowl and fish, and a mixed diet that usually contained a mix of foods from these two baskets. Being a vegetarian from birth, he stuck to the first basket, “but from the moment he read Henry Salt’s Plea for Vegetarianism he became ‘a vegetarian by choice’”, Ramachandra Guha wrote in Gandhi Before India, reports The Indian Express.

Interestingly, Gandhi’s definition of vegetarian food classified milk as non-vegetarian, and egg (sterile ones) as vegetarian food. Yet, adversity makes the best of us flexible in our ways, and Gandhi who was a regular visitor to the Viceregal Lodge would always carry his goat’s milk curd with him, and offer it to others. Becoming Indian: The Unfinished Revolution of Culture and Identity narrates an incident at the Viceregal Lodge where Gandhi politely refused the scones and ice creams the Viceroy offered and ate the bowl of goat’s curd he’d brought with him. On another occasion, the book contains an episode of Lord Mountbatten’s butler, Charles Smith recalling how, “he [Gandhi] even persuaded Lord Louis to sample a mouthful! His Lordship bravely swallowed it, but gracefully declined the offer of more”.

What constituted a typical meal for Gandhi?
In Gandhi’s book, Diet and Diet Reform, the chapter “Food Faddists” carries a sample of one of Gandhi’s experimental diets. Admitting he “had lost over five pounds in weight” and that “fellow faddists should know” what he was up to, he revealed his diet. “I take generally: 8 tolas of germinating wheat, 8 tolas of sweet almonds reduced to a paste, 8 tolas of green leaves pounded, 6 sour lemons, and 2 ounces of honey. The food is divided into two parts, the first meal is taken at 11 a.m. the second at 6.15 p.m. The only thing touched by fire is water. I take in the morning and once more during the day boiling water, lemon and honey.”

The Mahatma’s experiments with foods

Known to experiment vastly with his diet and nutrition, Gandhi pursued his “dietetic experiments not merely from the vegetarian’s, but also from the brahmachari’s point of view”. Believing that the “control of the palate is the first essential in the observance of the vow”, Gandhi wrote – “six years of experiment have showed me that the brahmachari’s ideal food is fresh fruits and nuts. The immunity from passion that I enjoyed when I lived on this food was unknown to me after I changed that diet.”

Dr Mark Lindley, an academician and a scholar on Gandhi told indianexpress.com, “Gandhi’s vocation as a healthcare and nutrition expert, even if not discussed often, was more pronounced than his career as a lawyer”. According to him, Gandhi’s diet and healthcare concerns harmonise very well with the industry in the 21st century. Going by the text in Gandhi’s Key to Health and Diet and Diet Reforms, Gandhi limited his diet to raw vegetables, curd, fruits, fresh organically grown food, unpolished rice and coarse grains, millets, leafy vegetables, soya beans, neem seeds, jaggery, guava seeds, tamarind, groundnut cake and boiled vegetables with a hint of salt.

Gandhi often used empirical methods to experiment with his diet and not only did he limit the role of experimenting to himself, but also included others to help him gather and document his trials. According to Dr. Mark Lindley, “When Gandhiji started staying in Sevagram, he was not very familiar with the food. So he gathered a group of local people and asked them to try different foods. Doing this, he documented the ill-effects and good effects of food on people and carefully curated his diet.”

The most elementary truths about a person are often revealed in the ways they cook, eat and serve food. For a man who was known to switch his teacups in tea parties with cups of clear vegetable soup or lemon water, much like his views on freedom struggle, truth, justice, and non-violence, the food on Gandhi’s plate was always opinionated and never without a cause.

It is well known that the nation has a “saccharine tendency” to deify the “Father of the Nation”. But when we get to know of details such as what foods the Mahatma ate – for example, he preferred skimmed milk over full cream milk – it helps in revealing a human side to his personality. On his birth anniversary, we can’t help but wonder what the Mahatma would have wanted the nation to eat. But it looks like he left it to us to take independent decisions when he wrote – “Proof of the pudding is in the eating, let everyone make the experiment for himself”.