বাংলা
Friday 29th of May 2020 02:10 AM
You Are Here: Home → Bangladesh → Bangladeshi passport drops 5 notches in latest rankings Japanese passport is now the strongest in the world 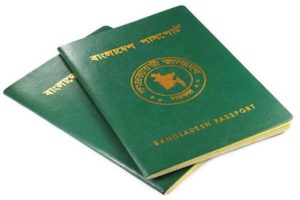 Probashbangla24 online Desk : The rank of Bangladeshi passport has dropped by five notches in the latest rankings in the Henley Passport Index 2018.

Bangladeshi passport ranked 100th with visa free access in 41 countries in 2018, according to the rankings released on 10 October by Henley & Partners, a citizenship and planning firm.

The Japanese passport is now the strongest in the world, overtaking Singapore, according to research released on Wednesday.

According to the 2018 Henley Passport Index released today, Japanese citizens can travel without a visa or gain a visa on arrival in 190 destinations – the most globally. The Japanese passport overtook the Singapore passport, which allows travel to 189 destinations without a prior visa, after gaining visa-free access to Myanmar earlier this year.

Third place is shared with Germany, South Korea and France with its citizens able to enter 188 countries without a prior visa. France and South Korea jumped to third place after gaining visa-free access to Uzbekistan and Myanmar respectively, reports independent.co.uk.

The UK and the US, both with 186 destinations open to their citizens, slid from fourth to fifth place in this year’s ranking, as neither can access any new country without a visa since the start of this year. In 2015, the UK and the US passports were most powerful.

At the other end of the spectrum, Iraq and Afghanistan continue to hold the bottom (106th) spot. Citizens of both countries can only access 30 destinations without getting a visa first.

Meanwhile, the United Arab Emirates (UAE) came in at 21st place, up from 62nd place in 2006, making it the most powerful passport in the Middle East.

Two of the biggest countries in the world, Russia and China, stayed in broadly similar positions. Russia, which fell from 46th to 47th place, had a short-term boost when in September Taiwan announced that it would offer a visa waiver programme for its nationals, valid until next July. China fell two places to 71, although its citizens gained entry to St Lucia and Myanmar without a prior visa.

The Henley Passport Index, a global ranking of the world’s passports according to the number of destinations holders can access without a prior visa, is based on data from the International Air Transport Association (Iata).

The passport rankings come as British citizens are waiting for clarity over whether they will be able to travel visa-free within the EU after 29 March 2019.