Convicts and charges of August 21 carnage 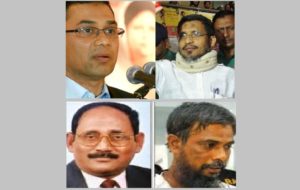 Probashbangla24 online Desk : The verdicts of the August 21 grenade attack cases, delivered after 14 years and 49 days after the deadly carnage, has changed the political landscape ahead of the national polls as many BNP leaders have been convicted for their direct or indirect involvement in the attacks.

BNP’s acting chairperson Tarique Rahman, former home minister Lutfozzaman Babar and many other former parliament members have been convicted in the two cases filed for murder and explosives.

The grenade attack on the Awami League rally in 2004 had killed 24 people including AL Women’s wing chief and late president Zillur Rahman’s wife Ivu Rahman and injured at least 300 others. PM Sheikh Hasina narrowly escaped the assassination attempt but suffered damages in her ear drums.

Take a look at the charges and convicts in the cases –

Charge: Conspiracy and planning of the attacks

These 9 persons were convicted for planning the assassination under the protection of affiliation of government agencies and top officials.

The twenty-nine have been charged with causing grievous hurt, attempt to murder, murder, abetment and criminal liability.

The rest of the convicts, including acting BNP chief Tarique Rahman, have been sentenced to life imprisonment for their involvement in the planning of the attacks.