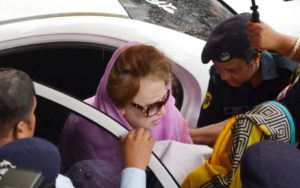 The prison authority has shifted the BNP chief following a court order passed down on Thursday last.

She was taken to the Cabin Block of the hospital in a blue Pajero jeep around 3:40 pm, reports UNB citing Inspector General of Prison Brigadier General Syed Iftekhar Uddin Ahmed.

She will be kept in a cabin on the 6th floor of the Cabin Block of the hospital.

Four police vehicles escorted the former prime minister to the hospital while many leaders and activists of her party paid respect to their leader standing on both sides of the road.

The BNP chief was sentenced to five years in jail on February 8 in the Zia Orphanage Trust corruption case. She landed in prison the same day.

The HC on Thursday directed the government to admit Khaleda immediately to the BSMMU for treatment.

In response to a writ petition, the court asked the authorities to form a fresh five-member medical board to examine Khaleda’s health and start her treatment.

The board would be headed by Prof Abdul Jalil Chowdhury of internal medicine and Associate Prof Badrunnesa Ahmed, a psychiatrist of BSMMU.

The bench of Justice Sheikh Hassan Arif and Justice Razik-Al-Jalil gave the order following a writ petition filed by Khaleda seeking court directives on the government about sending her to a specialised hospital.