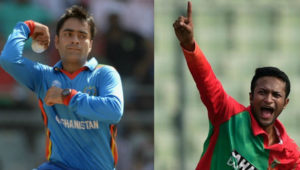 Rashid Khan has become the top-ranked one-day international (ODI) all-rounder after his performance in the recently concluded Asia Cup.

Rashid Khan is first Afghan to become first in the category, and 32nd overall to reach top position in the list with a rise of six places.

Indian players dominated the batsman and bowlers ranking with skipper Virat Kohli maintaining his top spot in the batsman ranking.

Pakistan’s Babar Azam is the only batsman in the top ten batsman list.