Shakib returns home: Hopes to back to field within a month 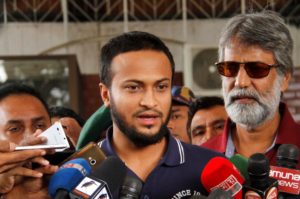 The leading all rounder is now hopeful that it might be possible to get back to start playing within a month.

He said that his infection was under control but needed monitoring. He was expected to be back to the playing field within the next three months so that he could test whether he feels pain while doing cricketing activities.

He also informed that he had to do blood tests every week to find the status of the infection.

“If there is any infection in the bone then there is no possibility of that going away via medicines. For sure there won’t be any surgery for the next six to twelve months but the good thing is that it might be possible to play without a surgery,” the all-rounder told reporters.

Shakib went to Melbourne on October 5 after returning midway through the Asia Cup. He also underwent surgery in Dhaka to remove pus from the infected finger.

The doctors gave him antibiotics and injections that helped improve his condition. He was discharged from the hospital on Saturday.

“It’d be the best if could play without undergoing any surgery. However, it’s not confirmed yet whether I have to undergo surgery or not. I hope to be back to the playing field after a month but it’s also a matter of finger strength and might need so may not be possible to get back that soon.”