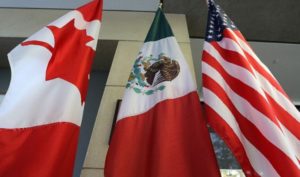 Probashbangla24 online Desk : Canada and the US reached a deadline deal on a new free trade pact that will include Mexico, the governments announced late Sunday, after more than a year of talks to revamp a pact President Donald Trump had labeled a disaster.

The rewrite “will result in freer markets, fairer trade and robust economic growth in our region,” said a joint statement from US Trade Representative Robert Lighthizer and Canada’s Foreign Affairs Minister Chrystia Freeland.

In the end, the governments overcame their differences with both sides conceding some ground, and hailing the agreement for a region of 500 million residents that conducts about $1 trillion in trade a year.

“It’s a good day for Canada,” Canadian Prime Minister Justin Trudeau said, while Mexican Foreign Minister Luis Videgaray tweeted the deal was good for his country “and for North America.”

The political stakes were high.

Trump, who pursues an “America First” policy on trade, needs to look strong heading into the November midterm elections where his Republican Party is fighting to keep control of Congress, while Trudeau does not want to be seen as caving before next year’s general election north of the border.

Canada had risked being frozen out of a US-Mexican deal reached in August.

The Canadian dollar jumped Monday to a five-month high in Asian trade after reports of the deal.

Ottawa will now open its dairy market further to US producers, and — in return — Washington left unchanged the dispute settlement provisions.

The agreement will allow them to sign the agreement before Mexico’s President Enrique Pena Nieto leaves office December 1, the date that was the cause of the last-minute flurry of activity.

Under US law, the White House is required to submit the text to Congress 60 days before signing — and officials barely made it by the midnight deadline.

Ottawa effectively sets production quotas and the price of milk, which raises prices to consumers but provides farmers with a stable income. Tariffs of up to 275 percent have kept most foreign milk out of the Canadian market.

Canada had opposed US demands to weaken or eliminate NAFTA’S dispute resolution mechanism, whose arbitration panels Ottawa used to resolve trade conflicts, and to defend against US anti-dumping and countervailing duties, notably against its important lumber industry.

Even late last week officials had warned that time was running out for a new agreement.

But a senior US administration official said the final rewrite is a “fantastic agreement” and he called it “a big win for the United States, Mexico and Canada.”

Alongside changes to the dairy market in Canada, officials said it includes stronger protections for workers, tough new environmental rules, and updates the trade relationship to cover the digital economy and provides “groundbreaking” intellectual property protections.

In addition, it adds provisions to prevent “manipulation” of the trade rules, including covering currency values, and controls over outside countries trying to take advantage of the duty-free market, the official said.

One of the most important sectors concerns the auto sector, which NAFTA revolutionized.

The US had sought increased American content installed in duty-free autos, and the new text foresees rules to encourage North American supply of components.

While the pact should protect Mexico and Canada from Trump’s threatened 25 percent tariffs on cars, still pending are the duties on steel and aluminium, which officials said was on a “separate track,” handled by the Commerce Department.

Canada will maintain its subsidized cultural sector, despite US objections.

Canadian and Mexican negotiators, as well as US industry, had rejected the American demand that any new NAFTA contain a “sunset clause” requiring the agreement’s reauthorization every five years.

Under Sunday’s deal, the trade pact will remain in force for 16 years but will be reviewed every six years.

More than two-thirds of Canadian exports go to the United States, equivalent to 20 percent of its Gross Domestic Product, while Canada is the largest export market for the United States. AFP