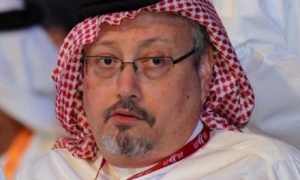 Probashbangla24 online Desk : Turkish prosecutors have opened an investigation into the disappearance of a missing Saudi journalist.
Jamal Khashoggi, a critic of Saudi Arabia’s Crown Prince Mohammed bin Salman, has not been seen since Tuesday, when he entered the Saudi consulate in Istanbul.

Turkish sources quoted by Reuters and the Washington Post say they believe he has been killed inside the consulate.

They did not give any evidence for the claim, nor suggest how he was killed.
Saudi officials have not yet commented, however a source at the consulate – also quoted by Reuters – described the accusations as baseless.

The source added that a security team had arrived in Istanbul to investigate Mr Khashoggi’s disappearance.

Turkish media said prosecutors were now looking closely at the case, although this may be a widening of an inquiry begun on Tuesday.

The two unnamed sources said on Saturday that the initial assessment of police was that Mr Khashoggi had been killed at the consulate.

Turkey has taken the side of Qatar over its blockade by Saudi Arabia and other neighbours, and Turkey’s rapprochement with Iran has riled the government in Riyadh.

The head of the Turkish-Arab Media Association told the New York Times that Turkish police officers providing security for the consulate had checked their security cameras and did not see the journalist leave on foot. But Turan Kislakci added that diplomatic cars had been seen moving in and out.

On Wednesday, the Turkish foreign ministry summoned Saudi Arabia’s ambassador and asked for an explanation about the disappearance.

What happened on Tuesday?

Mr Khashoggi went to the consulate to obtain a document certifying he had divorced his ex-wife, so that he could marry his Turkish fiancée, Hatice, who went with him to the building and waited outside, but did not see him leave.

He was required to surrender his mobile phone, which is standard practice in some diplomatic missions.

Hatice said he left the phone with her and told her to call an adviser to Turkish President Recep Tayyip Erdogan if he did not return.

She said she waited for him outside the consulate from about 13:00 (10:00 GMT) until after midnight and did not see him leave. She returned when the consulate reopened on Wednesday morning.

The 59-year-old journalist is one of the most prominent critics of the crown prince, who has unveiled reforms praised by the West while carrying out an apparent crackdown on dissent, which has seen human and women’s rights activists, intellectuals and clerics arrested, and waging a war in Yemen that has triggered a humanitarian crisis. BBC