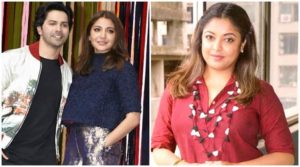 Probashbangla24 online Desk : At the Sui Dhaaga success press conference in Mumbai on Friday, actors Anushka Sharma and Varun Dhawan were asked about the sexual harassment allegations that Tanushree Dutta has levied against her Horn Ok Pleassss co-star Nana Patekar.

Both Anushka and Varun extended their support to Tanushree, stating that every individual should stand up for themselves and that working environment should be safe for all.

Anushka said, “Not just as a woman but as an individual, your workplace has to be the safest environment after your home. You shouldn’t feel threatened or in danger while performing your duties, whatever profession you might be. It’s very frightening to know the details that have come out. For Tanushree Dutta to speak up about this takes a lot of courage to come out there and say these things.”

“Knowing the tide that will be against her. That’s the reason why a lot of people don’t speak. But the fact that she’s coming out and speaking about it, it’s our collective duty to just respect the woman, and hear what she is speaking. Hear her out and to not get into judgements, character analysis and all those sort of things that happen. I understand it’s a legal matter and the truth will come out, and it’s fine. But if someone is choosing to come out and speak up, the least you can do is listen to them and be respectful about it,” Anushka added.

Varun Dhawan, on the other hand, expressed quite passionately that if something like this happened on the set of his film, he would personally prevent it. He said, “If anything like this happens on my film set, I’ll personally make sure I’ll prevent it. You cannot let violence take over. Law and order should take its course and investigate the matter. You cannot post her pictures in (certain) clothes just to taint her image. Just don’t do that. A lot of people in the media are doing that. Let’s all be collectively responsible for something like this. When something like this happens, it’s the environment that is to blamed, not a particular person. Environment breeds people to do the wrong thing. It happened in 2008 and we are reacting to it in 2018. It’s not a good sign.”

Anushka added to what Varun had to say. She said, “We should stop questioning ‘why is this happening so late.’ That’s also not right. If justice hasn’t been served, it can happen anytime. Let’s get to the conclusion of the matter, enough talk about it. The law needs to step in. I’ll give my opinion, someone else will give theirs, but it’s time the law steps in.”