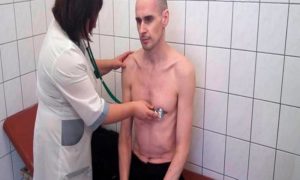 Oleg Sentsov opposed Russia’s annexation of his native Crimea in 2014. He was sentenced to 20 years in prison in 2015 for conspiracy to commit acts of terrorism. Sentsov denied the charged and called his prosecution a political vendetta.

Russia’s Federal Penitentiary Service said on Friday that Sentsov decided to stop the hunger strike that he has been on since May.

The Tass news agency quoted the service’s deputy director, Valery Maximenko, as saying Sentsov accepted the pleas of prison doctors and his lawyers who had been asking him to stop. Sentsov’s lawyer said last month that the hunger strike has irreversibly damaged Sentsov’s health.