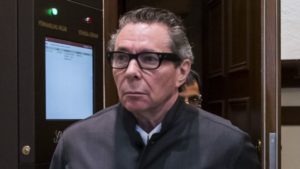 Probashbangla24 online Desk : A French photographer at the heart of a rape scandal that saw this year’s Nobel Prize for Literature postponed has been handed a two-year prison sentence.

On Monday a Swedish court found Jean-Claude Arnault, 72, guilty of raping a woman in an apartment in Stockholm in 2011.

Arnault, who is well known in Sweden, is married to a former member of the centuries-old Swedish Academy.

The crisis forced the academy to cancel this year’s literature award in May.

“The defendant is found guilty of rape committed during the night between the 5 October and 6 October 2011,” the Stockholm district court said while announcing its verdict.

How did the Nobel row unfold?

In late 2017, some 18 women came forward in a Swedish newspaper to accuse Arnault of sexual harassment and assault in the wake of the #MeToo movement, prompting an investigation by state prosecutors.

He later denied all the alleged incidents, many of which were said to have happened at properties owned by the Academy or at his literary club.

All but one of the cases ended up being dropped.

In April this year, the Swedish cultural organisation handed over an internal report it had conducted through lawyers to judicial authorities.

The same month, it voted against removing Arnault’s wife, the poet and writer Katarina Frostenson, from its 18-person committee.

This, along with accusations of conflict of interest and the leaking of Nobel winners’ names, is said to have divided the Academy and sparked a wave of resignations – including by Ms Frostenson and the Academy’s head, Prof Sara Danius.

Technically, members of the Swedish Academy cannot resign from their positions, which are assumed for life. But they can stop taking part in its activities.