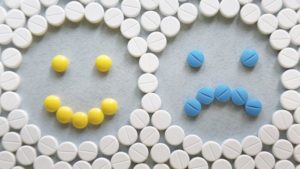 Probashbangla24 online Desk : Millions of people get bad side-effects trying to cut down on or come off antidepressants, a large review says.
The All Party Parliamentary Group for Prescribed Drug Dependence review suggests half of patients have withdrawal symptoms and for half of these the symptoms will be severe.
Patients should be properly warned, it says. The guidance says symptoms are usually mild and clear up in a week.
But it’s not uncommon for side-effects to last for weeks, months or longer.
The extreme side effects of antidepressants
Teenage antidepressants ‘doing more harm than good’
Antidepressants: ‘It’s keeping me going’
The review authors, Dr James Davies, from the University of Roehampton, and Prof John Read, from the University of East London, say about four million people in England may experience symptoms when withdrawing from antidepressants, and about 1.8 million may experience these as severe.
This might include:
anxiety
sleep problems
hallucinations
They looked at 24 pieces of research, involving more than 5,000 patients, to reach their conclusions, published in the Journal of Addictive Behaviours.
Some comments shared by these patients included:
“It took me two months of hell to come off the antidepressants – was massively harder than I expected”
“While there is no doubt I am better on this medication, the adverse effects have been devastating – when I have tried to withdraw – with ‘head zaps’, agitation, insomnia and mood changes”
“The difficulty of getting off has been a tough road and taken me years of trying and is something that doctors could be more knowledgeable of and supportive with”
Dr Davies said: “This new review of the research reveals what many patients have known for years – that withdrawal from antidepressants often causes severe, debilitating symptoms which can last for weeks, months or longer.
“Existing NICE [National Institute for Clinical Excellence] guidelines fail to acknowledge how common withdrawal is and wrongly suggest that it usually resolves within one week.
“This leads many doctors to misdiagnose withdrawal symptoms, often as relapse, resulting in much unnecessary and harmful long-term prescribing.”
Under review
Public Health England will look at the new data as part of its review into prescribed drug dependence and NICE is currently gathering more evidence to update its advice.
Antidepressants are one of the most common prescription drugs in the UK and their use has been rising.
NHS figures show there were nearly 65 million of these prescriptions given out in England in 2016 – 3.7 million more than in 2006.
Antidepressants are not addictive. And research shows they can be helpful but can take a few weeks to take effect.
If you take an antidepressant for four weeks without feeling any benefit, speak to your GP or mental health specialist about whether you should continue on them.
ProfWendy Burn, President of the Royal College of Psychiatrists, said: “Antidepressants are an effective, evidence-based treatment for moderate to severe depression, and are a life-saver for many people. But not enough research has been done into what happens when you stop taking them. As this review shows, for many people the withdrawal effects can be severe, particularly when antidepressants are stopped abruptly.
“It’s good to see more of a focus on this. We are pleased that Public Health England are prioritising dependence on, and withdrawal from, prescribed medicines as an area of review and welcome NHS England’s referral to the National Institute for Clinical Excellence (NICE) asking that they do the same.” BBC