Priyanka Chopra heads for London to shoot The Sky Is Pink 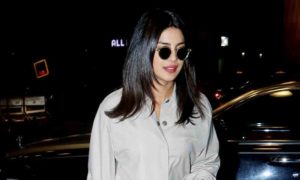 Probashbangla24 online Desk : New Delhi: Actress Priyanka Chopra, who has been shooting for Shonali Bose’s ‘The Sky Is Pink’ has reportedly left for London to kick off the next schedule of the film. The actress was on Sunday clicked by the shutterbugs at the Mumbai airport, reports Zee News.
Firstpost quoted a source, close to the development, saying that after completing the first schedule in August in Mumbai, the crew will begin shooting major portions of the film in UK between 10 to 21 October, which is where Aisha has grown up. The director has apparently done the recce of the location and is currently preparing for the extensive shooting schedule.

Last month, Priyanka shared a picture from the sets of the film in which she is seen in a Bengali bride avatar and a spot boy is styling her hair with a cloth iron.

‘The Sky Is Pink’ revolves around Aisha Chaudhary, to be essayed by Zaira Wasim, who was born with an immune deficiency disorder and was diagnosed with pulmonary fibrosis at age 13. As per reports, Priyanka will be joined in by Farhan and Zaira in London, who plays her husband and daughter respectively in the film.