বাংলা
Sunday 29th of January 2023 11:33 AM
You Are Here: Home → Science & Technology → Fiberglass-spinning robots could be construction workers of the future

Fiberglass-spinning robots could be construction workers of the future 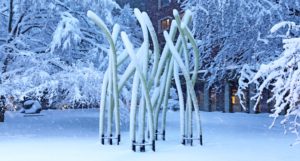 Probashbangla24 online Desk : Much like a silkworm uses a single thread to swaddle itself in a cocoon, a new kind of robot spins a single strand of material around its body to build custom-shaped fiberglass structures.

Each robot, slightly larger than a 1-liter bottle, is girded by a silicone balloon and topped with an arm that turns like a propeller. To build a piece of piping, the robot’s arm winds resin-coated fiberglass thread around its puffed-up silicone belly. Ultraviolet light then hardens the resin and glues the fiberglass strands together. When the robot completes a 9-centimeter-long segment, its belly deflates and the machine scoots up the tube where the arm resumes spinning fiberglass. By tilting in a new direction, the bot can control how the tube bends.

Designer and roboticist Markus Kayser and his MIT colleagues commissioned 16 of their fiberglass-spinning bots to build curved tubes up to 4.1 meters long. This bouquet of fiberglass pipes withstood seven months of Massachusetts autumn and winter weather — an “extremely impressive” demonstration of the bots’ capabilities, says Nathan Melenbrink, a roboticist at Harvard University.

The machines could join forces with other types of construction robots to build more sophisticated, multimaterial structures, says Radhika Nagpal, another Harvard roboticist. Robotic construction crews could create infrastructure in deserts, underwater or in other hazardous environments — perhaps even on other planets, she says.

The fiberglass-spinning bots currently are controlled by a computer and can build only predesigned structures. But future versions equipped with cameras, lasers or other sensors could coordinate and respond to obstacles to build site-specific structures on the fly. That may make them useful for propping up collapsed buildings during search-and-rescue operations, says Francesco Mondada, a roboticist at École Polytechnique Fédérale de Lausanne in Switzerland.