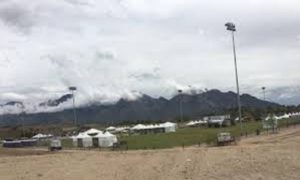 Probashbangla24 online Desk : Police in Nepal say five South Korean climbers and four Nepalese guides are missing on Gurja Himal mountain after a strong storm swept through their base camp.
Police official Bir Bahadur Budamagar says that a storm Friday night destroyed their camp and rescue helicopters sent early Saturday were unable to land because of bad weather conditions on the mountain.

It was unlikely the weather would clear on Saturday and the base camp is at least one-day trek from the nearest village.

A police team was also heading toward the base camp on foot but would likely reach there on Sunday. AP