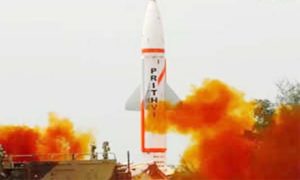 The trial of missile was conducted Saturday night by the strategic force command of the Indian army as part of a user trial.

“The missile having a strike range of 350 km blasted off from the launching complex-III of Integrated Test Range (ITR) at Chandipur of Odisha coast at 8:30 p.m. (local time),” reports quoted defense officials as saying.

“Its trajectory was closely monitored by electro-optical tracking systems, radars and other tracking systems. All the parameters within the stipulated time period were achieved during the trial,” the reports said.

The single-stage 8.56-metre-long missile with a diameter of one meter is thrusted by liquid propulsion twin engines. It is capable of carrying 500 kg to 1000 kg of warheads.

Prithvi-II has been designed and developed by India’s Defence Research and Development Organisation (DRDO).

Previously, it was successfully test-fired during night time in February this year. BBC