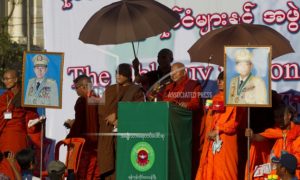 The march led to a stage lined with portraits of Senior Gen. Min Aung Hlaing, where speakers addressed a flag-waving crowd and condemned the international community’s involvement in Myanmar, claiming groups would “fight back” against international bodies who have called for the investigation and prosecution of the country’s top generals.

“We, the people of Myanmar, strongly denounce and condemn any intervention or intrusion by the foreign countries, international communities and various organizations which unrightfully manipulate our nation and our Myanmar armed forces,” proclaimed one of the speakers of the event, reading from a prepared statement.

Nationalist monk Wirathu also gave a speech calling for the international community to stay out of Myanmar’s national affairs.

A United Nations fact-finding mission reported last month that Myanmar’s military systematically killed thousands of Rohingya Muslim civilians, burned hundreds of their villages and engaged in ethnic cleansing and mass rape. It called for top generals to be investigated and prosecuted for genocide.

Myanmar government spokesman Zaw Htay was unable to be reached for comment Sunday.