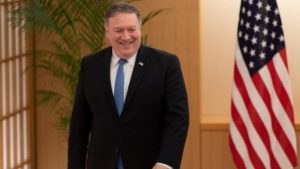 Shortly after arriving in South Korea following the visit, Pompeo posted a photo of himself walking along with Kim on Twitter, saying: “Had a good trip to #Pyongyang to meet with Chairman Kim. We continue to make progress on agreements made at Singapore Summit. Thanks for hosting me and my team @StateDept.”

Kim and Pompeo met for about two hours, including lunch at the Paekhwawon, or 100 Flowers Garden, a prestigious state guesthouse, according to a pool report.

The brief trip, his fourth since March, was initially planned in late August but called off at the last minute by US President Donald Trump who blamed lack of progress.

“It’s a very nice day that promises a good future for both countries,” Kim said, speaking through an interpreter, as he sat down at the lunch table with Pompeo.

“Thank you for hosting, President Trump sends his regards. And we had a very successful morning, so thank you and I am looking forward to our time here at lunch as well,” Pompeo said.

Kim pledged to work toward denuclearization at his unprecedented meeting with Trump in Singapore in June, but Pyongyang’s actions have since fallen short of Washington’s demands for irreversible steps to give up its arsenal, including declaring all nuclear and missile facilities.

A US official who was part of Pompeo’s delegation said the latest visit to the North was “better than the last time” but added: “It’s going to be a long haul.”

Pompeo’s last trip did not go well. He left Pyongyang in July hailing progress, only for North Korea to denounce him for making “gangster-like demands.” Pompeo did not meet Kim on that trip.

Pompeo visited Tokyo on Friday and is also due to travel to Beijing before returning home on Monday.

Pompeo had said en route to Asia he aimed “to make sure we understand what each side is truly trying to achieve.” He said he also hoped to agree a “general date and location” for a second summit, which Kim proposed to Trump in a letter last month.

Pompeo declined to give details of his planned negotiations when asked if he would agree to North Korean demands for a declaration to end the 1950-53 Korean War or to South Korea’s suggestion that to break the current stalemate, he should avoid pressing again for an inventory of North Korea’s nuclear weapons.

Trump has appeared keen on a second summit with Kim, even though recent North Korean statements have suggested the two sides are far from narrowing their differences.

Recently, Pompeo has angered North Korea by insisting that international sanctions must remain in place until it gives up its nuclear weapons. On Wednesday, he said there was unanimous support for this at last week’s UN General Assembly, even if Russia and China “had some ideas about how we might begin to think about a time when it would be appropriate to reduce them.”

North Korean Foreign Minister Ri Yong Ho told the United Nations last month that continued sanctions were deepening the North’s mistrust of the United States and there was no way Pyongyang would give up its nuclear weapons unilaterally under such circumstances.