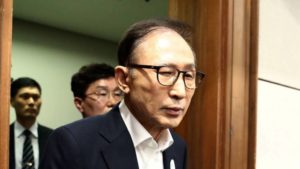 Probashbangla24 online Desk : Former South Korean president Lee Myung-bak was jailed for 15 years for corruption Friday, becoming the latest of the country’s ex-leaders to be sent to prison.

The 76-year-old CEO-turned-president, who served from 2008 to 2013, was found guilty on charges including bribery and embezzlement and ordered to pay a fine of 13 billion won ($11.5 million) by the Seoul Central District Court.

“Bringing everything into consideration, heavy punishment for the accused is inevitable,” said a judge during the trial that was live televised.

Lee was not in attendance, citing ill-health.

The former South Korean leader was indicted in April on 16 charges that included bribery, embezzlement and abuse of power.

The court found that Lee was the de-facto owner of DAS — a controversial auto parts company which he claimed was his brother’s — which he used to create slush funds of around 24 billion won.

Lee was also found guilty of accepting nearly six billion won from Samsung Electronics in return for a presidential pardon for its chairman Lee Kun-hee, who was jailed for tax evasion.

Both Samsung and Lee have denied any wrongdoing. AFP