Gayle says no, but Darren Bravo and Pollard back in West Indies T20I squad 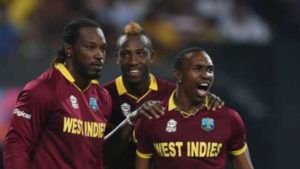 Chris Gayle, who is playing the Afghanistan Premier League at present and will be playing the T10 league after that, made himself unavailable for selection for the India and Bangladesh tours, Cricket West Indies (CWI) said in a release, but he remains available for the home series against England early next year and the World Cup. Andre Russell was picked for the T20Is, but not the ODIs because he “has been ruled out of all 50-over cricket due to injury”.

Bravo and Pollard’s inclusions were the result of talks between CWI and a handful of estranged high-profile players, with a view to having the big names feature in the World Cup in England next year. These players had fallen out with the board for various reasons, the primary one being the clash between playing domestic cricket and overseas T20 leagues. The board had said availability for regional tournaments was a requirement to be picked for the West Indies squads, causing a rift with the players who are highly sought after by the T20 leagues. However, this year, with the World Cup in mind, the board decided to bring forward the domestic 50-over competition to October instead of February 2019 – that switch means there will be minimal clash between the Super50 and various T20 leagues. CWI said if the players play the Super50 and perform, a World Cup call-up is open for them.

Dwayne Bravo and Lendl Simmons, who’d also committed to playing the Super50 along with Darren Bravo and Pollard, did not feature in the squads for the India tour. CWI chief executive Colin Grave had said earlier that the stiff competition for the allrounders’ spot in the line-up meant Dwayne Bravo would have to work that much harder to break through. Spinner Sunil Narine also remains on the sidelines for now.

The ODI squad features three uncapped players in opener Chandrapaul Hemraj, allrounder Fabian Allen and pacer Oshane Thomas. Allen and Thomas will stay on for the India T20s too, along with other newcomers in left-arm pacer Obed McCoy, left-arm spinner Khary Pierre and the big-hitting Sherfane Rutherford.

Batsman Evin Lewis, who’d turned down a central white-ball contract last week, is in both squads. Fast bowler Alzarri Joseph, who is on the road back from a stress fracture of the back he suffered late last year, has been included for the ODIs pending a fitness test. Joseph was included in the Test squad for India too, before being ruled out after two fitness assessments.

Oshane Thomas was one of the stars of the CPL earlier this year. Playing for Jamaica Tallawahs, he claimed 18 wickets at an average of 17.66 while hitting speeds upwards of 145kph.

Rutherford, playing for Guyana Amazon Warriors, put on a display of six-hitting that has lifted him into international reckoning. Against Trinbago Knight Riders – and Dwayne Bravo – he was particularly brutal, smashing 45 off 13 balls. He also scored a hundred in the Global T20 Canada in July – 134 not out off 66 balls – against an attack that included Tim Southee, Sheldon Cottrell and Andre Russell.

Pierre and McCoy have also been picked based on their CPL performances, while Allen and Hemraj have shown form with West Indies’ A and B teams. Pierre picked up 11 wickets in just seven games at 13.36, with an economy rate of 5.65, to finish among the top ten wicket-takers despite playing significantly fewer games than others on the list.

West Indies’ chairman of selectors Courtney Browne said the selection panel had one eye on the World T20 in 2020 too, hence the raft of new faces in the T20I squad. “With the 2020 ICC World T20 two years away and the limited amount of T20 Internationals within the next year, the panel believes at this juncture it is time to invest in the young players that have emerged over the last two years from Windies A and B teams, along with 2018 CPL.

“The panel believes that this new group of cricketers, in addition to their cricketing skills, will have the athleticism needed to improve our fielding, which will be vital to our success. The selection of a young group two years prior to the World T20 gives the coaching staff time to help them with their skills and for the team to develop into a cohesive and competitive unit.”