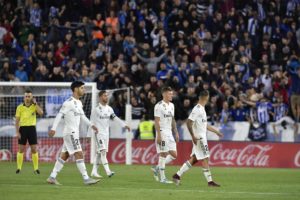 Probashbangla24 online Desk : It would have been more of a surprise if Real Madrid had scored, rather than fired yet another blank in an impotent performance at Alaves on Saturday.

Real tumbled to a 1-0 defeat at Mendizorroza, which means they have not scored for four-and-a-half matches in all competitions, close to seven hours of play.

The last time they found the back of the net was September 22, when Marco Asensio fired home in the 41st minute against Espanyol, but this time the Spaniard was forced to start the game on the bench.

It is Real’s longest run of games without a goal since April 1985, when they went on a five-game drought, eventually coming fifth in the league but lifting the UEFA Cup.

This is also the third round of games running Madrid have missed the chance to move ahead of Barcelona at the top of the table, with the Catalans facing Valencia on Sunday, and coach Julen Lopetegui is the rightful target for criticism after a damp squib of a showing.

Indeed, the former Spain boss must shoulder the blame for this defeat after a strange team selection which deprived Los Blancos of width and left them toothless in attack.

With Marcelo out injured and creative midfielder Isco sidelined too, it didn’t make sense for Lopetegui to drop Asensio, who has the spark and magic in his locker that can unlock a defence.

The 22-year-old has not been in dynamite form but has a skill-set that few others possess and can make headway on the flanks.

With the exception of Gareth Bale, who was positioned more centrally in any case, Madrid started with only Alvaro Odriozola as someone who could offer any dynamism out wide.

The right-back, still bedding in after his summer switch from Real Sociedad, was one of the few Madrid players who found space in the first half, but was unable to make anything of it.

Lopetegui, perhaps wary of the Basque side after a strong start to the season, choked the game by playing four natural centre-midfielders in Toni Kroos, Luka Modric, Casemiro and Dani Ceballos.

Abelardo played one up front instead of his usual two and it led to a first half that saw no clear chances for either side.

Lopetegui made a bold move in taking off Karim Benzema at half-time for Mariano Diaz, who offered plenty of energy but no precision.

Real’s new No.7 obviously cannot hold a candle to their old one, with Cristiano Ronaldo’s shadow increasingly looming large over this misfiring Madrid side.

The Portuguese leaving was not Lopetegui’s fault but the coach is not coming up with any answers to the barrage of questions about his team’s failings in front of goal.

Lopetegui has made it fairly clear at the start of the season that he doesn’t trust Vinicius Junior and yet he found himself throwing the young Brazilian on in place of Bale with 10 minutes to go.

Lopetegui threw the kitchen sink at Alaves without any rhyme or reason and there were no green shoots for the coach to take hope from ahead of the coming games.

Manu Garcia’s 95th-minute winner turns the pressure up on the coach, but even with the score level, Madrid’s goal problem was costing them dearly.

Madrid have two matches, both at home against Levante in La Liga and Viktoria Plzen in the Champions League, to find goals from somewhere ahead of their Clasico trip to Camp Nou on October 28.