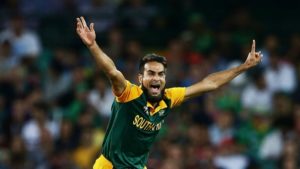 Probashbangla24 online Desk : Imran Tahir, the veteran legspinner from South Africa, who will turn 40 next year, said that he wants to play as long as possible for his country.

The seasoned campaigner, however, indicated that if South Africa emerge victorious in next year’s World Cup, he might call it a day.

“I’m trying to go as long as I can,” Tahir noted ahead of the second ODI against Zimbabwe in Bloemfontein. “Make sure I enjoy my game and I give what the team requires of me. I wouldn’t want to overstay in the team for too long. I want to leave with respect.

“It’s a bit early for me to say anything [about retirement],” he stated. “I’m loving the game at the moment. One thing I can say, if we win the World Cup then I’ll probably call it. It’s early for me, and I’m enjoying every opportunity I get to play for South Africa.”

The legspinner didn’t play in limited overs games in Sri Lanka, as the think tank was keen on trying out other spin options – Tabraiz Shamsi and Keshav Maharaj. The veteran cricketer, though, participated in the T20 Blast in England and the Caribbean Premier League to keep himself match-fit.

He gave a good account of himself in both the T20 Blast and CPL, picking up 15 and 16 wickets respectively. Tahir also made a successful return to South Africa’s ODI side by snaring a couple of scalps versus Zimbabwe in the first ODI in Kimberley. “I’ve been playing the game, which is very good for me. I’d rather be playing than having a rest.”

Tahir also noted that he was training very hard to maintain his fitness standards ahead of the World Cup. “I’ve been working really hard on my fitness. We’ve got so many fit guys in our team, so if you want to keep the standards up, a guy like me, I need to be really up from a fitness point of view and make an impact. It’s going to be a challenge, but I’m the kind of guy who loves challenges.

“I’m trying to focus my training and take that into the World Cup. I’m developing some bowling and fielding plans and things like that. And preparing for some difficult times when I might need to bowl, and I need to be really up for it whenever the captain needs me to bowl.”

Tahir also said that he was excited at the prospect of bowling alongside the ‘mystery’ spinner Shamsi in the ongoing ODI series versus Zimbabwe. He further added that he constantly discusses plans and shares his knowledge with the left-arm wristspinner.

“It’s a really exciting time that we have another mystery bowler, Shamsi, and I’m really looking forward to playing with him if we play both together in any game. We do talk a lot about the game and make plans well in advance in any series or any game. And from my point of view I’m more than happy to help anyone who wants to talk about spin.

“It’s nice to see the spinners coming up. I’m really looking forward to sharing my knowledge with him, and with all the spinners I play with, even at franchise level for Dolphins. I always try to help spinners as much as I can wherever I go and play, anywhere in the world. I love to talk about bowling, and whoever comes for help I’m always there. Even in IPL, PSL, I try to help the youngsters as much as I can.”