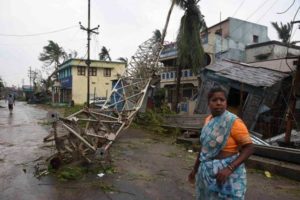 Probashbangla24 online Desk : A severe cyclone damaged homes and blew down trees and power poles in eastern India, where nine people were killed and about 300,000 forced to move to higher ground.

Cyclone Titli, or Butterfly, had winds blowing up to 150 kph (95 mph) Thursday when it came onshore around daybreak, the India Meteorological Department said. It spread rain widely in coastal districts of Orissa state and also hit northern parts of neighboring Andhra Pradesh state.

An 8-year-old boy drowned in a flooded canal in Ganjam district in Orissa state, where five people were also reported missing after being swept away by flood waters, the Press Trust of India reported.

District Administrator Vijay Amruta said the five people were swept away by flood waters while returning home from a cyclone shelter. Rescuers were searching for them.

Schools were closed and air and train travel curtailed in the region. Authorities also set up more than 800 shelters stocked with food and relief materials.

Electricity and telephone services were cut in a number of areas in both states.

The severe cyclone weakened by Thursday night with wind speed reducing to 70 kph (45 mph) and it was expected to become a deep depression by Friday, the meteorological department said.

Orissa state is prone to cyclones which develop in the Bay of Bengal. In 1999, a devastating cyclone killed more than 15,000 people.

Bangladesh’s coastal districts were also warned to prepare for possible storm effects there. Boats were ordered ashore and inland ferries were told to suspend services.