বাংলা
Tuesday 2nd of June 2020 06:59 AM
You Are Here: Home → United Kingdom → Boris Johnson slams Brexit plan as he sets out his Tory vision

Probashbangla24 online Desk : Crowds have packed into a speech by former foreign secretary Boris Johnson at the Conservative Party conference in Birmingham.
Mr Johnson renewed his attack on Theresa May’s Brexit plan, describing it as a “cheat” that could lead to a boost for the far-right.
In a wide-ranging speech, he also called for tax cuts and an increase in house-building.
Long queues formed outside the event more than an hour before he began.
He began with a self-deprecating joke about the chancellor’s Brexit warnings. Philip Hammond’s prediction that Mr Johnson would never be prime minister, he said, could be “the only Treasury forecast in some time to have a distinct ring of truth”.
Mr Johnson said he wanted to “put some lead in the collective pencil” and end a “seeping away of our self-belief”.
He also spoke up for police use of stop-and-search. 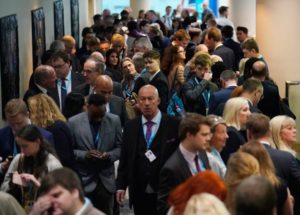 Earlier party chairman Brandon Lewis brushed off claims Mr Johnson’s alternative agenda sought to undermine Theresa May.
“It’s always dangerous getting into hypotheticals about what people may or may not say in the future, even if it’s just later on today,” he said.
Mr Johnson has been a vocal critic of the prime minister’s Brexit plan since leaving the Cabinet, calling it “a moral and intellectual humiliation” when setting out an alternative last week.
May: No special treatment for EU migrants
Middle-class drug users ‘to be targeted’
Emergency £240m to free up hospital beds
Ahead of his conference appearance, he was pictured out jogging, in what some interpreted as a “parody” of Mrs May’s claim that the “naughtiest” thing she did as a child was to run through a field of wheat.
When asked before the fringe event how she had been getting on with Mr Johnson, the prime minister laughed and told BBC One’s Breakfast: “Well, I’m sure that’s going to be a very lively event.” 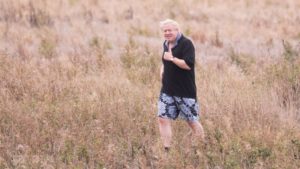 Questioned again later on BBC Radio 4’s Today about how she felt that her former colleague appeared to be mocking her, she replied: “What I feel is that I, and this government, and this party, are getting on with the important job… of getting a good deal for the United Kingdom when we leave the European Union.”
Mr Johnson’s attitude towards business – he was reported to have used the f-word in response to their Brexit concerns – was criticised by Sir Digby Jones, former boss of lobby group the CBI, at the weekend. BBC