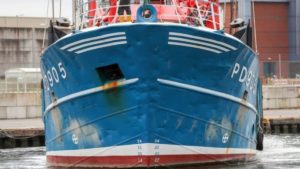 Probashbangla24 online Desk : A Brexit-supporting member of the cabinet has a simple analogy to explain whether Theresa May’s government can survive.
The government will crash onto the rocks if it ends up with no deal on Brexit or indefinite membership of an EU customs union, this minister told me.
“So we need to find a place between those two extremes,” the minister said.
If the prime minister opted for membership of a customs union to avoid no deal, then the minister would resign from the cabinet.
If Britain fell into no-deal, then there would be no government from which to resign.
The comparison of Theresa May to the captain of a stricken ship trying to chart a course between the jagged rocks of no-deal and a customs union shows why the prime minister finds herself in such a politically perilous position.
The waterway between the two sets of rocks is fiendishly narrow. As one comes into view – a customs union – the ship appears to lurch towards the no-deal rocks.
Brexit talks hit ‘real problem’ over border
DUP plan to vote against the Budget over Brexit red lines
How could May get Brexit deal through MPs?
The sharp dilemma became apparent when Dominic Raab, the Brexit secretary, told EU’s chief Brexit negotiator Michel Barnier on Sunday that the UK could not accept a proposal drawn up by UK and EU officials for the Northern Ireland backstop.
This is the arrangement to guarantee no hard border in Northern Ireland if, by the end of a 20 month transition period following Brexit, the UK and the EU have failed to agree a satisfactory trade deal for the future.
The ‘backstop to the backstop’
The EU reportedly moved over the last week, by saying that the UK as a whole could join this version of the customs union.
Brexit-supporting members of the cabinet and others say this would have to have a guaranteed end date, a demand resisted by No 10 which says that is a deal breaker with the EU.
In order to provide a definitive guarantee of no hard border in Northern Ireland, the EU stuck to its fundamental position. This states that the prime minister would have to agree that Northern Ireland would remain within an EU regulatory zone just in case the new proposals are not agreed.
This is being dubbed the backstop to the backstop which would see checks down the Irish Sea. 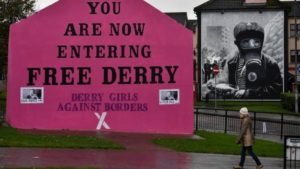 Theresa May is adamant that the UK as a whole must be treated as one customs territory, with no distinction for Northern Ireland. It appears that the prime minister may be willing to allow separate treatment for Northern Ireland for regulatory checks on agri-products and manufactured goods.
Mrs May feels strongly about treating the UK as one customs territory, because she believes that anything else would effectively lead to the break up of the UK.
The DUP is warning that it may no longer prop up her government if she gives too much ground.
Sammy Wilson, the DUP’s Brexit spokesman, told me over the summer that there would be “physical opposition” by Unionists to additional barriers placed within the UK between Northern Ireland and Great Britain.
The current impasse, which means that no UK-EU talks are scheduled before the start of a Brussels summit on Wednesday, means that the rocks of no deal are now starting to hove into view.
Supporters of a deal will be hoping that Northern Ireland will provide a positive analogy.
Hopes of a deal appeared hopeless in the final days and then – with interventions from Bill Clinton but ill will still hanging in the air – they pulled off the Good Friday Agreement in 1998.
But then talks can also fail – and fail dramatically. BBC