বাংলা
Saturday 8th of August 2020 09:15 AM
You Are Here: Home → Uncategorized → Brexit: Jean-Claude Juncker says chance of deal has increased 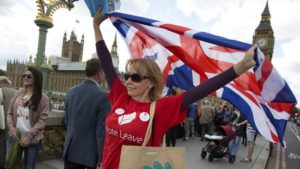 Probashbangla24 online Desk : The chance of the UK and the EU agreeing a Brexit deal has grown in the last few days, the head of the European Commission has said.
Speaking to the Austrian press, Jean-Claude Juncker said that while he was not sure an agreement could be reached by October, it could be by November.
Foreign office minister Sir Alan Duncan also expressed optimism that a deal could be reached before December.
The UK is due to leave the EU on 29 March 2019.
But there is still no agreement on some issues, including how to avoid new checks on the Irish border. Brexit: All you need to know
At-a-glance: The new UK Brexit plan
Brexit: Key dates and potential hurdles
Asked in an interview whether an agreement could be reached at the next meeting of European leaders in 11 days’ time, Mr Juncker said: “We are not that far yet. But our will is unbroken to reach agreement with the British government.”
He also reiterated his position that a no-deal scenario “would not be good” for either the UK or the EU.
EU officials gave an upbeat assessment of progress in the negotiations on Friday evening and reported a better atmosphere in talks over the Irish border.
That prompted sterling to rise against the Euro and the US dollar.
The BBC’s Brussels correspondent Adam Fleming said officials still “seem to be pushing for the whole withdrawal agreement to basically be done” by the EU summit on 17 October.
“Although, if we have learned anything from Brexit it’s that the timetable is incredibly flexible, to use diplomatic language,” he told BBC Radio 4’s Today programme.
The positive comments came as the Guardian reported senior Conservatives had been in private contact with a number of Labour MPs to persuade them to back Theresa May’s Brexit deal.
Some Labour MPs who were mentioned in the article took to Twitter to refute the claims. Rachel Reeves tweeted: “All the Labour MPs listed work hard and fight Tories locally and nationally every day.”

It comes weeks after the head of the European Council Donald Tusk said Theresa May’s Brexit plans were unworkable.
Both sides had hoped to finalise the so-called divorce agreement and agree a statement on their future economic co-operation by the October summit.
But last month, the EU’s chief negotiator Michel Barnier said that if both sides were “realistic” there could be an agreement by November, when a special one-off summit has been arranged. The European Commission is also considering whether to publish an analysis of where the two sides agree on elements of their future relationship.
It could appear alongside the EU’s latest contingency plans for a no-deal scenario, which will be released next week.
Speaking on BBC Radio 4’s Any Questions, Sir Alan Duncan was also optimistic about the prospects of a deal.
“We are in the art of the possible here, and from what I see in government, I think that we will get a deal, be it in October or November at the two consecutive summits,” he said.
What is the Irish border problem?
Currently, thousands of people cross the border between Northern Ireland and the Republic of Ireland every day. Goods and services pass between the two areas easily without any restrictions.
This is because both the UK and Ireland are both members of the EU and part of the EU single market and customs union. But that could change after Brexit because the UK wants to leave both the single market and customs union.
Both the UK and EU agree they do not want a “hard border”, which means physical checks or infrastructure like cameras or customs posts.
They want to achieve this by agreeing a new trade deal with the continuation of open borders.
But in the event that no deal is reached by the Brexit deadline, both sides agree there needs to be a “backstop” solution – which means a last resort plan – that would keep the Irish border open.

The EU’s proposed backstop solution would see Northern Ireland stick to those rules of the customs union and single market that are required for cross-border co-operation to continue.
But the UK government is against this idea, saying it would effectively separate Northern Ireland from the rest of the UK and create a border in the Irish Sea.
Instead, it would like to see the UK as a whole remaining aligned with the EU customs union for a limited time. But the UK has now signalled that it is “open to looking at some of the options on regulatory checks”.
Negotiators are yet to find a solution that is acceptable to both sides.
Reality Check: Red lines on the Irish border
Love, Brexit and the Irish border BBC