Eugenie wedding: How I also went plastic free on my big day 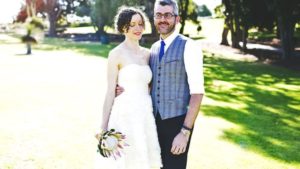 Probashbangla24 online Desk : The venue, food and drink, music, the dress, hair and make-up… a happy couple’s checklist can go on and on.
And Princess Eugenie has added another factor into the equation – her wedding has to be plastic free.
The Queen’s granddaughter, who is marrying Jack Brooksbank on 12 October, told British Vogue that the couple’s house was anti-plastic and “Jack and I want our wedding to be like that as well”.
So how realistic is it? As Lindsay Miles discovered, there are quite a few things to take into consideration.
It’s just one day, why bother?
“A wedding is such a significant day that it’s even more important to be true to your values than on any other day,” says Lindsay.
“You can’t go back on your values just because you’re getting married.”
Are you ready for another royal wedding?
Princess Eugenie wedding: What’s the cost and who’s paying?
WATCH: Five ways to break up with plastic
Lindsay, 36, a writer from Kent, and her Australian husband Glen, 38, first tried living without plastic in 2012.
What started out as a month-long challenge has turned into a way of life for the pair, who live in Perth, Western Australia.
“I’m more the driver than he is but we both got involved at the same time,” she says. “I’m the one that puts in more work but he agrees with all the values.”
So going plastic free for their wedding, in 2014, was a no-brainer.
Where to start?

Plastic finds its way into weddings in many forms: food storage, drink packaging, decorations, flower delivery – that’s just the start.
For Lindsay, who blogs about living without waste, trying to make her special day plastic free came first ahead of any other wishes.
“We said we want to be plastic free ‘how can we do that’, rather than saying, ‘We want to have roses, we want to have canapes, can we do that plastic free?'”
They wanted “memorable” but didn’t want to break the bank.
Simplicity was also key. “For me, simple means no fuss – and devoting whole weekends to projects was out,” says Lindsay. 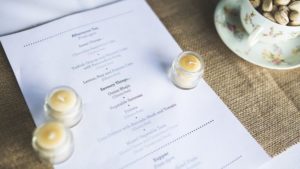 Involving suppliers from the outset was the most effective way of making the plastic-free magic happen, she says.
“It’s really about having conversations with people and explaining why you want to do it. People are willing.”
But it is also about taking matters into your own hands.
“If you get stuff delivered to you, that’s when it comes in packaging. For us, it was making sure on the day – we went to all the deli, the bakery et cetera because that way we could guarantee there was no packaging.”
Eco wedding – how they did it

Invitations: electronic, sent via email or Facebook
Flowers: freshly picked by family and friends from their gardens, arranged in old jam-jars
Decorations: borrowed lace bunting from old tablecloths and curtains • tins fished out of recycling bins and wrapped in twine and in hessian ribbon, which was also used for table runners • hired tablecloths and tea cups • bought beeswax candles in jars
Food: local businesses focused on locally sourced produce • hired pizza oven • cakes from a bakery that didn’t use plastic packaging • Indian snacks donated by a friend as a wedding gift
Drink: tap beer and cider • local wine • pre-made soft drinks served in jugs • loose tea and coffee • no straws
Tableware: venue’s own crockery and cutlery (although having pizza minimised amount needed) • borrowed glasses
Gifts: guests told not to buy presents – to avoid any waste and wrapping
Dress: rather than spend hours trawling charity shops, the bride bought a High-Street dress she wore again and then sold on eBay
Hair and make-up: used make-up the bride already had • washed hair with bicarbonate of soda and vinegar
Favours/confetti: went without
Any compromises?

Lindsay accepts that achieving a 100% plastic-free wedding also meant relying on other people.
For their wedding, they hired a pizza oven and used a local deli to provide the fresh ingredients – without plastic packaging – but did they know what went on behind the scenes?
“It’s possible he had some plastic that I didn’t see… whether he got a packet of salad in a plastic bag, I don’t know.”
All the plastic you can and cannot recycle
How good a recycler are you?
The wedding’s eco-friendly credentials were counterbalanced by the air miles required to fly her family – albeit just four people – to Australia.
“In hindsight, I should have fallen in love with the guy in the village – but I didn’t,” Lindsay jokes.
“I fell in love with a guy in Australia, so it’s one of those things you have to compromise. My parents, my sister and brother flying out for a wedding – it’s a one-off.”
They did, however, decide to have the wedding as local as possible in the city of Perth, rather than the countryside, to reduce driving distances.
How difficult for Eugenie to achieve?
Wedding planner Katrina Otter says working with the right people is key, as some of the more “old-school suppliers” are less keen to adapt.
“Make sure you have the right team on board – work with a team willing to do it or one where it’s already part of their ethos.”
But she adds: “The bride and groom might not know where plastic is involved – such as cutlery often comes wrapped in cling film.”
No royal wedding is complete without a vibrant floral display.

And, traditionally, a key part of those has been the floral foam – the bricks of green, spongy foam that provide a foundation for floral arrangements, as well as a water source.
Katrina says finding an alternative to the non-biodegradable plastic material has become a big issue for the industry and many florists are looking to do it another way.
The florist who created the displays for the Duke and Duchess of Sussex’s wedding, Philippa Craddock, says she didn’t use any floral foam for their big day.
The number of couples requesting plastic-free weddings is on the rise, says Katrina, although it remains a small proportion.
Another issue to consider for any bride – especially one who is having live TV coverage – is the hair and make-up.
Kate Arnell, who blogged about her zero-waste wedding, in 2014, says she found it tricky to find plastic-free make-up and hair products.
“Now, there are a lot more available and I have since swapped to plastic-free alternatives,” she says.
Although whether Princess Eugenie will be opting for Lindsay’s bicarbonate of soda and vinegar concoction on her hair is yet to be confirmed… BBC