Sexual assaults by prisoners treble since 2010

Probashbangla24 online Desk : The number of prisoners being sexually assaulted by other inmates has trebled since 2010, the BBC has found.
The Ministry of Justice (MoJ) found sexual assaults by prisoners increased from 92 in 2010 to 275 in 2017.
The Prison Governors Association said the “phenomenal” increase in assaults was due to the loss of experienced prison officers.
The Prison Service said it was “making sure that prison officers have the tools they need to do the job safely”.
Figures obtained by a freedom of information request show the rate of sexual assaults against prisoners has also trebled.
Doncaster HMP and Northumberland HMP both recorded 14 sexual assaults committed by prisoners last year – equalling the previous record for most sexual assaults recorded by a prison. 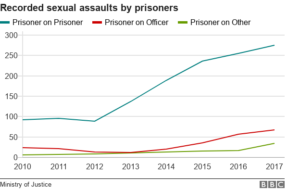 Frances Crook, chief executive of the Howard League for Penal Reform, said she feared the current figures are “the tip of the iceberg”.
Most sexual assaults in prisons go unreported, a recent study by the Howard League reported.
The study states: “Men find it very difficult to talk about what has happened to them because of the common view that a man should be able to fight off an attacker.”
The statistics also “do not show how many prisoners have been sexually assaulted by staff, yet we are aware of high-profile cases of staff who have been dismissed or even jailed,” Ms Crook said.
A study by the MoJ found that sexual assaults in prisons had increased disproportionately when compared to all assaults reported in custody.
Prisoners in jail for a sexual offence are disproportionately involved in sexual assault incidents as both assailants and victims.
Reported sexual assaults also include incidents where drugs or other prohibited items are retrieved from a prisoner’s anus or vagina – a practice known as “prison spooning”.
In these cases prisoners serving time for violent offences and robbery were more likely to be involved.

Danny Shaw, BBC Home affairs correspondent
These statistics provide the clearest evidence yet of an increase in sexual violence in prisons, alongside the well-documented problems of bullying, intimidation and assaults.
The rise may be partly explained by more rigorous record-keeping – just as attacks on staff and prisoners are being more accurately logged than before.
It may also be down to the greater willingness of victims to come forward, mirroring the increase in reporting more generally – the number of sexual offences recorded by police in England and Wales has nearly tripled since 2010.
But there may also be a genuine rise in sexual assaults behind bars, a reflection in particular of the growing population in custody of sex offenders.
It’s an issue the prison authorities must grip quickly.
Presentational grey line
Andrea Albutt, president of the Prison Governors Association, said: “We can have CCTV and all these fancy things to make our prisons safe, but what makes our prisoners safe is good relationships.
“The way you become a really good prison officer is through experience. You have a lot of not confident, not competent prison officers in the system at the moment.”
A Prison Service spokesperson said: “All allegations of sexual assault and violence are taken extremely seriously.
“That’s why we have doubled sentences for those who assault our staff and will work with police and the CPS to secure prosecutions wherever possible.
“Over the last two years we have recruited more than 3,500 additional prison officers and are spending an extra £40m on safety, security and the fabric of the prison estate.” BBC