It’s time for EU to get serious on Brexit, says Dominic Raab

Probashbangla24 online Desk : The minister responsible for Brexit has told the EU to “get real” and reach a deal with the UK.
Dominic Raab also said EU chiefs had disrespected Theresa May with “jibes” at a recent summit.
He said the UK would leave without a deal rather than be “bullied” into signing a “one-sided” arrangement.
Speaking at the Conservative Party conference in Birmingham, he said the government’s proposed deal with the EU was not “perfect”.
But he urged Tory Eurosceptics who are campaigning for the plan to be ditched to get behind it.
BBC Parliament: Live coverage of Conservative conference
Tories must offer change, says Hammond
Tory ministers brace for a bumpy week
Theresa May: ‘I do believe in Brexit’
And Chancellor Philip Hammond predicted that there would be an economic bounce if and when a Brexit deal was agreed by the UK and the EU.
He reminded people saying that a deal could not be struck that people had had the same scepticism about the electric light bulb ever working.

With less than six months to go before Brexit day, the UK and the EU have not yet reached a deal on how separation will be managed and what their new relationship will look like.
Mr Raab said that if the EU insisted on trying to “lock us in via the back door” of its customs union and single market, the UK could be left with “no choice” but to leave without a deal.
The “whole of the government machine is busy preparing for no deal” – not because they want it to happen or because it’s likely, but “because it might happen”, he said.
He dismissed “lurid predictions from the prophets of doom” about no-deal, including planes being grounded and ports blocked.

Even if the UK did not reach an agreement with the EU, he said: “I find it hard to believe that they would, for narrow political ends, seek to punish Britain in such a crass and counterproductive way.”
Mr Raab criticised the EU over its reaction to Theresa May’s proposals at last month’s summit in Salzburg.
“Our Prime Minister has been constructive and respectful,” he said.
“In return we heard jibes from senior leaders, and we saw a starkly one-sided approach to negotiation.”
What is wrong with Chequers?
Brexiteers feel it keeps the UK far too close to Brussels and doesn’t fulfil the Leave campaign’s promise during the 2016 referendum campaign to “take back control”.
EU leaders have rejected the plan because they believe it would undermine the single market by allowing the UK to “cherry pick” from EU law.

Theresa May says the ball is now in the EU’s court and she wants a more detailed response from them on their objections.
The government has said it will not agree to anything that divides Northern Ireland from the rest of the UK nor makes the country a member of the European Economic Area like Norway.
Johnson’s running joke? 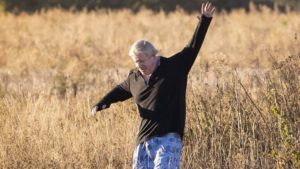 One of the most vocal critics of the government’s Brexit approach has been former foreign secretary Boris Johnson, who branded Theresa May’s plan “deranged” in a newspaper interview at the weekend.
Despite not being in Birmingham, Mr Johnson made an eye-catching appearance as he was photographed running through fields near his Oxfordshire home.
Given that Mrs May famously said her naughtiest moment was running through fields of wheat as a child, some pundits are wondering whether this was an attempt to “troll” the PM by the former Leave campaign frontman, who resigned in protest at the Chequers plan in July.
Hammond’s low wages warning
Later on Monday morning on the conference stage Chancellor Philip Hammond called on Conservatives to convince voters that their policies would “deliver a better tomorrow for them and their families” and warned that slow wage growth and job insecurity meant too many people feared they were being left behind.
He announced the government’s intention to increase the number of people who can access science and technology courses and spend about £30m on encouraging big business to mentor small firms.
His plans also included a £125m package allowing large employers to transfer up to 25% of their apprenticeship levy funds to businesses in their supply chain from April next year.
The apprenticeship levy is a tax on large companies intended to pay for training at smaller companies, but uptake of the new policy has been slow.
What is a ‘Canada-style’ trade deal?
Mr Hammond rejected suggestions that Brexit had caused an irreparable rift between his party and business.
“The Conservative Party has business at its core,” he told the BBC’s Today programme.
In his speech he said that “the Conservative Party is, and always will be, the party of business”.
The Conservatives also announced plans to stop restaurant chains taking tips left for staff by diners although Labour said it had simply followed their lead.
“This is now the fourth policy the Tories have copied from us at their conference,” shadow business secretary Rebecca Long Bailey said: “It’s beginning to feel like Groundhog Day.” BBC