Is my washing to blame for the plastic problem? 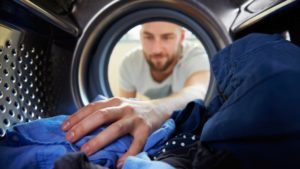 Probashbangla24 online Desk :Did you know that every time you do your washing you could be contributing to the world’s plastic problem?
Take a look at your clothes labels. If they contain some sort of man-made fibres then studies show your clothes wash could be threatening the world’s seas.
But there are ways of reducing the damage. Here are some of the options.
What’s the issue?

When you do laundry, synthetic clothes shed tiny threads which end up in the water – about 700,000 fibres in a single domestic wash.
Less than a millimetre in length, the microfibres then make their way into the waterways and seas.
The worst offenders are polyester, acrylic and nylon.
A polyester fleece jacket releases 1,000,000 fibres per wash, according to one study, while a pair of nylon socks is responsible for 136,000 fibres.
Scientists from the University of Manchester found those fibres are littering riverbeds across the UK.
Research highlighted by MPs this week shows they end up being eaten by fish and other aquatic creatures, ultimately ending up in the food chain.
Earlier this year, scientists found fibres, including strands of underwear, in every sample of mussels they tested in British seawaters or bought from UK supermarkets.
Another study, from the University of Exeter, found microfibres in the environment altered animals’ behaviour.
Is there anything I can do?

Well if you’ve always hated laundry, here’s your excuse not to do it. Otherwise, there are some changes you can make:
Wash at a low temperature. Higher temperatures result in more fibres being released.
Fill up your washing machine. Washing a full load results in fewer fibres being released as there is less friction.
Aim for shorter washes – again this reduces the friction between fabrics.
Use washing liquid instead of powder. The grains of the powder can result in loosening the fibres.
Spin clothes at lower speeds to reduce chances of fibres loosening.
Avoid using detergents with a high pH and oxidizing agents. Some fabric softeners also help to reduce friction.
There is, of course, the option of washing your clothes less frequently.
That would have the biggest impact, says Jeroen Dagevos, from ocean conservation project Plastic Soup Foundation.
He also suggests buying fewer synthetic clothes, instead buying natural fabrics such as wool, cotton, linen, silk or cashmere.

Another option, recommended by the Institution of Mechanical Engineers in a new report, is the use of mesh laundry bags to catch threads – which can then be put in the bin.
Filters for washing machine waste pipes have also been developed, which can catch at least 80% of the fibres before they disappear down the drain.
There are also laundry balls on the market, which claim to “attract” fibres to stick them, instead of flowing out of your machine with the water.
Can the industry do more?
Yes, much more, according to Mr Dagevos, who says the size and scale of the problem is only just starting to be realised.
“It is much bigger than microbeads and much more complex to tackle,” he added.
Microbeads, found in products such as face scrubs, toothpastes and shower gels, have already been banned in the UK.
Aurelie Hulse, lead author of report Engineering Out Fashion Waste, says fabrics should be designed not to shed microfibres when they are washed.

Ocean Clean Wash, a campaign initiated by Plastic Soup Foundation, found that changing the design of fibres, such as length and density, could affect how many are released.
Adding a natural anti-shed treatment to fabrics was also shown to make a difference.
Mr Dagevos also says bringing in new regulations for manufacturers could help by forcing companies to put more resources into finding solutions. BBC