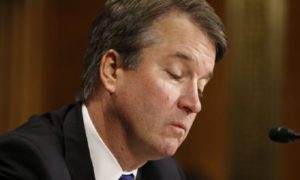 Probashbangla24 online Desk : The FBI has approached the second woman to accuse US Supreme Court nominee Brett Kavanaugh of sexual misconduct as it begins a fresh inquiry into him.
Deborah Ramirez accuses Judge Kavanaugh of exposing himself to her during a drinking game when they were students at Yale University in the 1980s.

He has denied the allegation, describing it as a smear.

President Donald Trump ordered a new investigation after the judge’s first accuser testified to a Senate panel.
The panel approved Judge Kavanaugh’s nomination but asked for the further inquiry before the full Senate votes on his appointment to America’s top court.

Despite ordering the FBI investigation, President Trump has continued to defend his nominee Mr Kavanaugh, who denies all the allegations against him.

On Saturday, Mr Trump said the FBI had “free rein” to investigate the judge.

“They’re going to do whatever they have to do, whatever it is they do. They’ll be doing things that we have never even thought of. And hopefully at the conclusion everything will be fine,” the president said.

The Supreme Court has the final say on some of the most contentious matters in the US and appointments are for life. Judge Kavanaugh is expected to tilt the court in favour of conservatives.

What does Ms Ramirez say?

Her lawyer, John Clune, announced that the FBI had “reached out” to interview his client and she had agreed to co-operate with their investigation. He made no further comment.

Ms Ramirez alleges the incident occurred during the 1983-4 academic year when they were both taking part in a drinking game at a dormitory party.

At one point, she told the New Yorker, a plastic penis was pointed in her direction and Brett Kavanaugh then apparently showed his actual penis, which she accidentally touched when she pushed him away.

In the interview, she acknowledges gaps in her memory caused by alcohol that night, which is said to have made her hesitant to come forward when contacted.

What other allegations does Kavanaugh face?

Christine Blasey Ford testified to the Senate committee that he had sexually assaulted her when they were teenagers in the 1980s.

Judge Kavanaugh angrily denied that he had ever assaulted her or anyone else.

Mark Judge, a high school friend of Judge Kavanaugh who Dr Ford says was in the room at the time of the assault, has said he will co-operate with any law enforcement agency that will “confidentially investigate” the allegations.

Two others who were allegedly present in the house during the alleged assault, PJ Smyth and Dr Ford’s friend Leland Ingham Keyser, are willing to co-operate “fully” with the FBI’s investigation, their lawyers said.

A third woman who has also publicly accused Judge Kavanaugh, Julie Swetnick, alleges he was involved in the drugging and sexual assault of girls at house parties in the 1980s.

She says she was the victim of a gang rape in 1982 at a party attended by Brett Kavanaugh.

Ms Swetnick’s lawyer said on Saturday that they had yet to hear from the FBI.

What will the FBI investigation do?

“As the Senate has requested, this update must be limited in scope and completed in less than one week.”

The inquiry involves the FBI reopening its previously completed background check on Judge Kavanaugh. This may mean going back to old witnesses – or speaking to new ones.

Dr Ford’s lawyer said her client welcomed the step but questioned the time limit of a week to hold the investigation. BBC