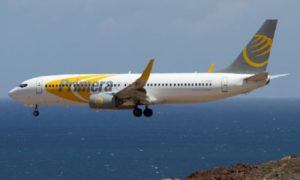 Probashbangla24 online Desk : A budget airline that began offering long-haul flights from UK airports earlier this year, including Stansted to the US, has collapsed.

Primera Air said it was ceasing all operations at midnight on Monday after 14 years of operations.

Flights to Washington and New York due to leave Stansted on Monday night were grounded and passengers have been told not to go to the airport on Tuesday.

One flight from Birmingham to Malaga arrived on Monday evening.

The airline, which had 15 planes, began offering low-cost flights from Stansted and Birmingham to North America – including Washington, Newark, and Toronto – earlier this year.

Flights from Manchester to Malaga were due to start later this month.

Most of the airline’s business involved taking Scandinavian holidaymakers to destinations such as Spain, Greece, Italy, Egypt and Turkey.

Canadian Angela Dorau was in a queue to board a plane from Paris to Toronto with her husband when there was an announcement saying the flight had been cancelled.

She said: “Everybody was stranded. Currently my husband and I are in a dumpy motel by the airport trying to frantically scrounge together the funds to pay for another way home.”

They are yet to find an alternative flight home – and she says what was supposed to be a budget trip looks like costing them an extra €2,000.

The Danish-registered airline – which started in 2003 as a charter provider – is not part of the Civil Aviation Authority’s ATOL Protection scheme, which covers only passengers booked on package holidays.

The regulator has advised passengers who have travelled on an outward Primera flight they will need to make their own arrangements to return to the UK.

People who had booked directly with the airline on future flights will not be covered either, the CAA advises.

Passengers who paid by credit card may be protected by Section 75 of the Consumer Credit Act 1974 and are advised to check with card issuers. Similar cover may apply if a Visa debit card was used.

Stranded in Malaga as our flight has now been cancelled for Monday 8 October. Will have to try and get other flights home. Sally James

My daughter Catherine is now stuck in Spain. She flew out on Saturday and was due to come back this Thursday. Antony Meadley

I was on a flight back to Newark (New Jersey) that was meant to depart at 5:55…an announcement went out at around 5:30. No one was given any plans, and everyone was just asked to leave…a horrible experience. Nickolaus Lachman

The airline said it had failed to secure long-term financing, meaning it had “no choice” but to file for bankruptcy.

Primera’s decision to start competing with other low-cost long-haul operators such as Norwegian and Wow appears to have led to its demise.

Signs that the airline was in trouble came in August, when it said short-haul flights from Birmingham to seven European destinations would end on 3 September.

It also blamed the late arrival of new aircraft from Airbus that forced it to cancel flights and lease planes.

When it began long-haul operations from Stansted in May, Primera was offering flights to New York’s Newark airport, Boston, Washington DC and Toronto starting at £149 each way.

It had planned to start flying from Madrid to New York, Boston and Toronto next month from €149 each way.

“The general feeling in the industry was: this airline is travelling a bit too fast in terms of their expansion with a fleet of that size,” he said.