Probashbangla24 online Desk : Actress Claire Foy has opened up about her struggles with anxiety, revealing how her career worsened her condition.
In an interview with the Guardian the 34-year-old said she had suffered anxiety since she was a child but it “exploded” when she became an actress.
Foy recently won an Emmy for her role as Queen Elizabeth II in the Netflix series The Crown.
But the star admitted the condition meant she doubted her ability and was plagued by negative thoughts.
“When you have anxiety, you have anxiety about – I don’t know – crossing the road,” she told the Guardian’s Weekend magazine.
“The thing about it is, it’s not related to anything that would seem logical. It’s purely about that feeling in the pit of your stomach, and the feeling that you can’t, because you’re ‘this’ or you’re ‘that’. It’s my mind working at a thousand beats a second, and running away with a thought.”
What is anxiety?
Anxiety is a natural human response when we perceive we are under threat
It can be experienced through thoughts, feelings and physical sensations
Most people feel anxious at times but it becomes a mental health problem if it impacts on your ability to live your life as fully as you want to
Treatments available include talking therapies, such as cognitive behaviour therapy (CBT) or medication
Symptoms include: feeling light-headed or dizzy; feeling restless or unable to sit still; faster breathing and a fast, thumping or irregular heartbeat; and panic attacks. More symptoms can be found here
Source: Mind
The actress said her condition also contributed to her struggling with self-doubt, including when she auditioned for the role of Anne Boleyn in the 2014 BBC adaptation of Wolf Hall.
“I’d read Hilary Mantel’s novel. And I just thought: ‘I’m not her. Not in any way, shape or form.’
“Anne was so intelligent, so alluring, so able to be mysterious and have people be fascinated with her. Anne knew she was special… I just didn’t see it.” 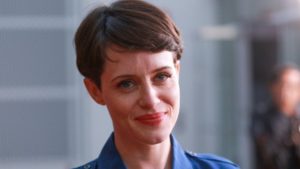 Foy said she developed anxiety as a child as “a tool to survive” and “try to feel safe”.
Her parents separated when she was eight years old and she said her response was to try to “make everybody happy. Never be angry. Be really sweet and well-behaved”.
Claire Foy: ‘I didn’t want to play the perfect housewife’
Fame, fortune, fear: Why do pop stars struggle with anxiety?
As an adult she eventually saw a therapist and said her anxiety had now “plateaued”.
“It’s still there, but I guess I don’t believe it so much any more.
“I used to think that this was my lot in life, to be anxious. And that I would struggle and struggle and struggle with it, and that it would make me quite miserable, and that I’d always be restricted. But now I’m able to disassociate myself from it more,” she said.
Where to get help
If you have been affected by mental health issues, or someone you know has, the following organisations may be able to help:
Mental Health Foundation provides a guide to mental health problems and treatment options
Mind provides advice and support to anyone experiencing a mental health problem
YoungMinds offers information and support specifically for children and young people and parents of those under 25 BBC