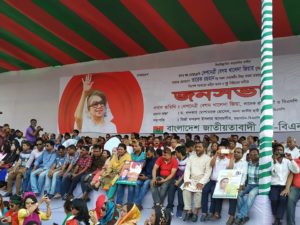 The rally began around 2pm today with party’s secretary general Mirza Fakhrul Islam Alamgir in the chair while BNP Chairperson Khaleda Zia has been named as the chief guest on the stage banner.

A chair has been kept blank for him on stage.

The BNP chief and the former Prime Minister Khaleda Zia is now in prison for five years in a corruption case.
Dhaka Metropolitan Police (DMP) on Saturday allowed BNP to hold the rally on 22 conditions.

Since the morning, leaders and activists from different places started coming to Suhrawadry with festoons and placards containing the pictures of Ziaur Rahman, Khaleda Zia andTariq Rahman.

Jatiyatabadi Chhatra Dal President Rajib Ahsan presented the greetings speech in the rally following the recitation of the holy Quran.

The DMP asked BNP to complete the program within 5pm.