Are delaying tactics the answer for May?

Probashbangla24 online Desk : As so often, the cabinet managed to agree on what they don’t like – the EU’s version of the backstop – but they had a harder time agreeing what they do all like.
And even after more than two hours of talks, there is, as things stand, no “fully formed” UK proposal to get the Brexit talks going again.
There is no miraculous solution that can show the EU that promising a customs union to the whole of the UK can have a time limit that fits with their principles.
Donald Tusk has demanded new facts on Wednesday.
But as Theresa May prepares to go to Brussels, there’s no sign of them. And there is no deal on the table right now that would definitely get through Parliament.
What to do then when there isn’t agreement? Delay of course!
‘Expectations low’ as PM heads to Brussels
No optimism for Brexit deal – EU’s Tusk
Brexit: All you need to know
One insider says the government has no choice but to play it long, in the hope that the passage of time will concentrate minds.
Indications from ministers are that the government is now realistically looking to the deal not being done (if it is) until December. (Meaningful vote with your Christmas turkey anyone?)
One cabinet minister told me the PM was trying to manage expectations, telling colleagues today “not to be downhearted” if there was no summit in November.
And there have been suggestions too for ages that the EU would be ready to offer an extension to the whole process. 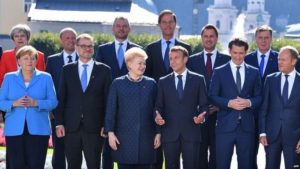 It’s not clear, however, what facts more time would change. Remember a lot of smart people have been trying to find a way to answer all the conundrums for months and months and months.
Officials on both sides thought they were moving towards a possible arrangement of paragraphs last week but the politics here meant it couldn’t be done.
And without new facts, will Theresa May be able to buy herself more time? The first call on that will be made in the next 48 hours by the EU.
The worst case scenario for No 10 is that EU leaders are so fed up with the UK position and what they see as the lack of reality, that on Thursday they formally say they will hold a no-deal summit in November.
That would switch them on to a track that would be hard to get off once in motion. One EU source expressed disbelief that Theresa May thought she could turn up on Wednesday with nothing new. It was simply crazy, in their view, to suggest that the ball can be lobbed back into the EU court.
The best case, and it seems right now unlikely, dream scenario is for the EU to say that, after all, there is a deal in reach, so let’s get a date in the diary for the sign-off next month. What seems more likely is a holding position. EU leaders could give some kind of vague noises that both sides still want to pursue negotiations, so that the talks can get going again.
One Brussels source said that while it is “time for choices”, they could give the prime minister space and time to build a majority at home for a deal.
But her party might not. Even if the EU gives her another few weeks to keep going, another few weeks to find a solution, if this summit goes visibly badly, it is not clear that her backbenchers and the Democratic Unionists will back Theresa May to carry on.
It’s becoming increasingly common around Westminster to hear MPs say, “I simply can’t see a way through.” BBC