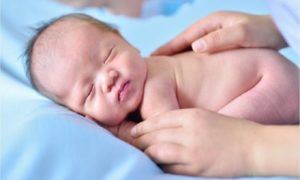 Health Desk : Gently stroking a baby reduces activity in their brain associated with painful experiences, a study has found.

The study, by University of Oxford and Liverpool John Moores University, monitored the brain activity of 32 babies while they had blood tests.

Half were stroked with a soft brush beforehand and they showed 40% less pain activity in their brain.

Author Rebeccah Slater said: “Touch seems to have analgesic potential without the risk of side-effects.”

The study found that the optimal pain-reducing stroking speed was about 3cm (1in) per second.

“If we can better understand the neurobiological underpinnings of techniques like infant massage, we can improve the advice we give to parents on how to comfort their babies.”

That speed of stroking activates a class of sensory neurons in the skin called C-tactile afferents, which have been previously been shown to reduce pain in adults.

But it had been unclear whether babies had the same response or whether it developed over time.

“There was evidence to suggest that C-tactile afferents can be activated in babies and that slow, gentle touch can evoke changes in brain activity in infants,” said Prof Slater.

Prof Slater said the study, published in Current Biology, could explain anecdotal evidence of the soothing power of touch-based practices such as infant massage and kangaroo care, where premature babies are held against the skin to encourage parent-infant bonding and possibly reduce pain.

“Previous work has shown that touch may increase parental bonding, decrease stress for both the parents and the baby, and reduce the length of hospital stay,” said Prof Slater.

The study authors now plan to repeat their experiment in premature babies, whose sensory pathways are still developing.

“We already know that positive touch – such as skin-to-skin care – makes a real difference directly to babies in neonatal care and also helps parents to bond with their baby.

“This new research suggests that parental touch could also help to alleviate pain in infants and Bliss is delighted to be funding Oxford University to do more research specifically on reducing pain in premature babies through the use of parental touch, from the new year.

“Many people do not realise just how many medical procedures a baby in neonatal care goes through during their hospital stay.

“Anything that can reduce a baby’s discomfort is a huge step forward in this underfunded area of research.” BBC