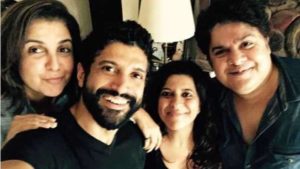 Probashbangla24 online Desk : Actor, singer and director Farhan Akhtar is maintaining that their family did not know about cousin Sajid Khan’s alleged misbehaviour with women.

Farhan lashed out at Aisha actor Amrita Puri for insinuating that Sajid’s family knew about his misconduct but chose to ignore it.

Sajid has been accused of sexual harassment by an actor, an assistant director and a journalist. Farhan shared a tweet on Friday writing how he is shocked by the allegations levelled against his cousin and said ‘he will have to find a way to atone for his alleged actions.’ Sajid’s sister Farah also shared a similarly worded tweet.

Amrita reacted to their statements saying it was hard to believe that Sajid’s family did not know about his behaviour. “It was fairly well known that @SimplySajidK is a creep and is completely inappropriate as far as his conduct with women goes. I was warned to stay away from him if I ever came across him. I refuse to believe that it has come as a surprise to ppl from the industry or his family,” she wrote in a tweet.

Farhan decided to react to Amrita’s tweet by calling it a ‘conspiracy theory.’ “I deeply resent your insinuation that me or my family knew of his behaviour yet did nothing. Your anger is justified. Your conspiracy theories not,” he wrote in a tweet.

Several celebrities’ names have cropped up in the #MeToo movement, leading several others to take a stern stand.