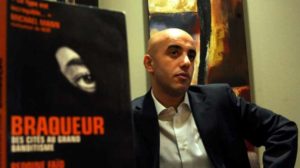 Probashbangla24 online Desk : Rédoine Faïd, a French gangster who broke out of jail using a hijacked helicopter in July, has been recaptured, police sources say.

The country’s most wanted fugitive, he was detained north of Paris, reportedly with his brother and two men.

Faïd, 46, has said he is a fan of gangster films, which he credits with teaching him how to pull off raids.

He was first arrested in 1998 for armed robbery. The 1 July jailbreak was his second and most dramatic escape.

He was sprung from a prison in Reau, south-east of Paris, by three heavily armed men who broke into the visitor’s room. They then bundled him into a helicopter flown by a flying instructor who had been taken hostage.

Faïd had been serving a 25-year sentence for masterminding a botched robbery in which a policewoman was killed in 2010.

He was recaptured in the town of Creil. French Justice Minister Nicole Belloubet told Europe 1 radio: “We’re going to put him in a high-security facility where he will be watched extremely closely.”

The interior ministry will be temporarily headed by Prime Minister Édouard Philippe.

He has said Hollywood movies, such as the Al Pacino thriller Scarface, inspired his lifestyle and some of his schemes.

During a 1997 attack on a security van, he used and his accomplices used ice-hockey goalkeeper masks, mimicking Robert de Niro’s gang in the film Heat.

He later said he had watched that movie “hundreds of times” on DVD and once told its director, Michael Mann, at a Paris film festival: “You were my technical adviser.”

His fame was helped by a 2009 book outlining his younger days on the streets of Paris and his descent into the life of a professional criminal.

That earned him the nickname “L’Écrivain” – or “the writer” – among French police.

Timeline of a jailbreaker

* Faïd’s cycle of imprisonment and escape began with his arrest in 1998 for armed robbery and bank theft.

* In 2009 he was freed on parole, swearing that he was a changed man – but by 2011, he had breached his terms of release and was back behind bars.

* In 2013, he escaped from a prison near Lille, using explosives to blast his way through five prison doors while holding guards hostage as human shields.

* In 2017, Faïd was sentenced to 10 years’ imprisonment for that jailbreak. He was also given 18 years for masterminding the 2010 robbery.

* In 2018, following a failed appeal, Faïd was given a heavier sentence of 25 years. BBC