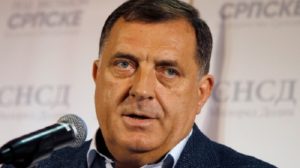 Preliminary official results from the election gave Dodik 56 percent of the vote and his main opponent, Mladen Ivanic, 42 percent. The projections were made with 44 percent of ballots counted.

“The will of the people leaves no doubt what they want,” Dodik said, adding that voters “punished” his opponent for his “servile policies toward the West.”

Dodik advocates the eventual separation of Serbs from Bosnia. His election to the three-person presidency, which also has a Muslim member and a Croat member, deals a blow to efforts to strengthen unity in the country, where ethnic divisions fueled the 1992-95 war that killed 100,000 people and left millions homeless.

“The number one priority for my job in the future will be the position of the Serb people and Republic of Srpska,” Dodik said, referring to the Serb-run mini-state he has led since 2010 and which resulted from a 1995 peace settlement.

The general election was seen as an indicator of Bosnia’s future direction: moving toward integration in the European Union and NATO or driven by entrenched rivalries and friction.

Russian President Vladimir Putin had endorsed the openly anti-West Dodik. The United States has imposed sanctions on Dodik for actively obstructing efforts to implement the 1995 Dayton Accords that ended the Bosnian war.

Voters in Sunday’s election filled positions in the complex governing system the peace accord created. The country consists of two regional entities – the Serb-run Republika Srpska and a Muslim-Croat federation – with joint institutions in a central government.

Supporters of a unified, multi-ethnic Bosnia found encouragement in the lead a moderate candidate for the Croat position in the tripartite presidency held after the partial count. Zeljko Komsic, had 49 percent, while nationalist contender Dragan Covic had 38 percent.

Covic advocated further fragmentation of Bosnia with the creation of a separate entity for the country’s Croats. However, Komsic’s likely victory still could trigger discord within the Muslim-Croat federation.

Croat nationalists dispute his legitimacy as a Croat representative, arguing that Komsic was backed overwhelmingly by Muslims. Covic has warned of an “unprecedented crisis.”

Sefik Dzaferovic, from the ruling Party of Democratic Action, won the Muslim seat in the presidency.

Along with the Bosnian presidency, voters picked the Serb president, the two entities’ parliaments and cantonal authorities during Sunday’s election.

More than half of Bosnia’s 3.3 million eligible voters cast ballots, election officials said. The campaign was marred by divisive rhetoric and allegations of irregularities that fueled tensions.