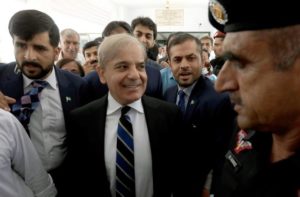 Probashbangla24 online Desk : Pakistani opposition leader Shehbaz Sharif was ordered jailed on Saturday for 10 days after being arrested in a corruption case, his lawyer said, meaning he will not be able to campaign for his party ahead of crucial by-elections next week.

Sharif is the younger brother of ousted Prime Minister Nawaz Sharif, who was sentenced earlier this year to 10 years in prison by an anti-corruption court after the Supreme Court removed him from power.

Friday’s arrest of Shehbaz Sharif by agents of the National Accountability Bureau (NAB) in Lahore involved a case of alleged corruption in a low-cost housing scheme when Sharif was chief minister of Punjab province.

A NAB court on Saturday heard charges that Sharif in 2014 illegally canceled a contract with a construction company and sought to award it to another company, allegedly for a bribe.

The court ordered him remanded in custody for 10 days to be interrogated, his lawyer Azam Nazir Tarar said.

Hundreds of activists from Sharif’s Pakistan Muslim League-Nawaz gathered outside the court, chanting pro-Sharif slogans as police and army Rangers guarded the venue.

Sharif denies any wrongdoing, and his brother has denounced corruption cases against him and other party leaders as politically motivated.

Lawyer Tarar said that Sharif was improperly arrested on a warrant that was kept secret. Sharif went to the court for questioning in another corruption case involving a water purification scheme but instead was arrested on the housing project warrant.

“They cannot arrest the leader of the opposition in this manner,” the lawyer said.

Ex-premier Nawaz Sharif was arrested 10 days before the July 25 general election, which was won by cricket star turned politician Imran Khan, who now leads the new government. He was released from prison last month pending an appeal.

The Sharifs’ Pakistan Muslim League-Nawaz came in second place in the general election. Their party denounced the polls as rigged, alleging the military and courts tipped the scale in favor of Khan’s party, a charge the army and judiciary deny.

The PML-N says that the arrest of Shehbaz Sharif was intended to weaken the party before by-elections to be held on Oct. 14.

The by-elections are for 11 parliamentary seats and 19 provincial assembly seats.

The voting could affect the slim majority Khan’s coalition government holds in parliament, though many of the constituencies are considered strongholds of his Pakistan Tehreek-e-Insaf (PTI) party.

The contests are considered to be closer in the provincial assemblies and could result in the PML-N winning back control of Punjab. (Reuters)