বাংলা
Tuesday 7th of July 2020 07:17 PM
You Are Here: Home → Uncategorized → Suu Kyi lost Malaysia’s support for her role against Rohingya: Mahathir He says he lost all faith in her

Suu Kyi lost Malaysia’s support for her role against Rohingya: Mahathir He says he lost all faith in her 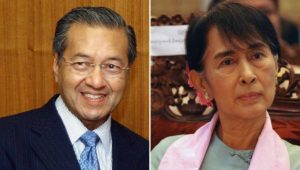 Probashbangla24 online Desk : Malaysian Prime Minister Dr Mahathir Mohamad has said Malaysia will no longer support the leadership of Myanmar’s leader Aung San Suu Kyi because of her handling of the Rohingya crisis in her country.

In an interview with Turkish international news channel TRT World, Dr Mahathir said Suu Kyi seemed to be a ‘changed person’ in over the plight of the Rohingya people, Malaysia’s The Star Online reported on Sunday.

“Over this issue, she seems to be a changed person. She didn’t want to say anything against the action taken by the military against the Rohingyas. So, we make (it) quite clear that we don’t really support her anymore,” he told host Ghida Fakhry.

Dr Mahathir also admitted that he had lost all faith in her.

He, however, said when he had recently written to Suu Kyi, he did not even receive a reply from her, and thus felt ‘very disappointed’.

“We’ve complained about the treatment of the Rohingyas to the world. In fact, we’ve ourselves received quite a lot of Rohingya people in our country,” he said.

Dr Mahathir, currently in New York, addressed the UN General Assembly on Friday (Sept 28) on the state of the Rohingya people in Myanmar.

He criticised the authorities in Myanmar and Suu Kyi for denying that the Rohingya people were being murdered, and their homes torched, forcing over a million refugees to flee.

Dr Mahathir also questioned the world for staying mum on the massacres that were carried out.

Earlier, United Nations investigators said that Myanmar’s military carried out mass killings and gang-rapes of Rohingya with ‘genocidal intent’, and that its commander-in-chief and five generals should be prosecuted under the international law.

Suu Kyi has also been heavily criticised for her failure to speak out against the treatment of the Rohingya by her country’s military.

She earlier said in hindsight, her government ‘could have handled it better’, referring to the Rohingya situation with a lame understatement.

There have been calls to revoke the Nobel Peace Prize awarded to her in 1991. Canada has also revoked Suu Kyi of her honorary citizenship over the Rohingya crisis.

A United Nations report last month called for the army chief’s prosecution for genocide against the Rohingya and singled out Aung San Suu Kyi for failing to speak up for the group. Facebook also took down the accounts of several army generals.

However, many people within the Buddhist-majority country see the issue through the lens of ethnic and religious sentiments, which had been worsened through a revised version of ‘national history’.

They have been influenced by years of rhetoric to be suspicious of Muslims and some regard the military action against the Rohingya as an operation against ‘terrorists’.