Probashbangla24 online Desk : A British couple are thought to be among those killed during flash floods in Majorca.
They were swept away while travelling in a taxi in Sant Llorenc des Cardassar, Spanish newspaper El Pais reports, and their driver is missing.
Torrential rainstorms hit the town – 40 miles east of the capital of Palma on the Spanish island – on Tuesday night.
The Foreign Office said it was “urgently seeking updates”, but would not confirm the deaths.
Weather forecasters reported that eight inches of rain fell in just four hours.
Emergency services confirmed that there had been at least six deaths in total, adding that “several [people] are missing”.
Flash flood kills at least eight on Majorca
Antonia Bauza, the deputy mayor of Sant Llorenc, confirmed two of the victims were British nationals to Radio Mallorca.
Two more local people were killed in the town, along with a further two victims, who died in the town of S’illot, according to the Civil Guard.

A statement from the Foreign Office said: “We are in contact with the Spanish authorities responding to flooding in Majorca, and urgently seeking updates from them.”
Hundreds of displaced residents are in emergency shelters, and around 80 soldiers are set to join more than 100 rescuers who are working in the area. 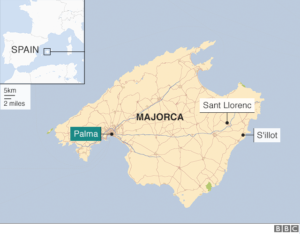 Spanish Prime Minister Pedro Sanchez tweeted his “solidarity and support for the relatives and friends of the victims, and for all those affected by this tragic flooding”. BBC