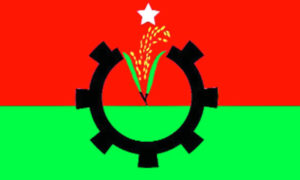 Probashbangla24 online Desk : BNP on Wednesday announced a two-day countrywide programme, including demonstrations and black-flag processions, protesting the verdict in the August 21 grenade attack cases that convicted a number of party leaders, including Tarique Rahman.

Besides, party’s different associate bodies will stage demonstrations and form human chains for five days in the next week.

As part of the programmes, BNP will demonstrate in all cities and district towns on Thursday.

The party will also take out black-flag processions in all cities and district towns on Tuesday.

Besides, Jatiyatabadi Mohila Dal and Jatiyatabadi Sramik Dal will from human chains across the country on Wednesday and Thursday respectively.

Earlier in the day, a speedy trial tribunal sentenced 19 people, including State Minister for Home Lutfozzaman Babar and former Deputy Minister for Education Abdus Salam Pintu, to death while 19 others, including BNP acting Chairman Tarique Rahman, to life imprisonment in two cases filed over the August 21 grenade attack on an Awami League rally in the capital in 2004.