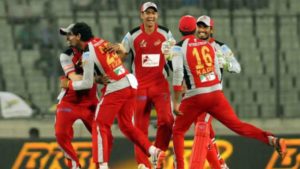 Probashbangla24 online Desk : Chittagong Vikings, the Bangladesh Premier League franchise, have decided not to take part in the upcoming edition of the tournament. Efforts are on by the BPL officials to convince and bring the franchise on-board once again.

”Yes they have mailed saying that they are unable to continue in the tournament,” BPL acting chairman Sheikh Sohel confirmed to Cricbuzz on Monday (October 1).

The franchise’s decision to make a sudden exit came to light when they decided not to send the list of players they want to retain for the upcoming edition of BPL. The last date of retention for the tournament ended on September 30.

”But we are waiting for the arrival of their franchise owner. They were with us for the last five years so we hope that we can convince them to be part of BPL,” Sohel said.

The forthcoming edition of Bangladesh Premier League, the country’s lone franchise-based Twenty20 tournament, will start from January 5. Initially, the tournament was scheduled to be played in October but BCB changed the schedule keeping the general elections in mind so as to provide adequate security for BPL, and instead opted to host Zimbabwe during that time for three ODIs and two Tests.

When asked whether they will go for a new franchise if they fail to convince Vikings, BPL acting chairman said, “‘I don’t think it will be possible to replace them with a new franchise. In that case we will have to play the tournament with six teams.”

The players draft will be hosted on October 25.