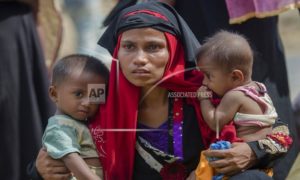 Probashbangla24 online Desk : UN secretary general Antonio Guterres has asked India to support Bangladesh and pressure Myanmar for the safe and dignified return of Rohingyas to their homeland.
Speaking up for Bangladesh, he said, “It was unacceptable that countries like Bangladesh have to accept a million refugees. Generosity is inversely proportional to richness, I think.”

Guterres reserved some of his sharpest commentary for the Myanmar authorities. “I have never seen a community so discriminated in the world as the Rohingya.”

He acknowledged reform of the UN Security Council is necessary but much as he would want it, he was powerless to do it alone, reports The Times of India.
Speaking at a town hall meeting in New Delhi on Tuesday Guterres said, “What can India do? First, support Bangladesh with the huge humanitarian problem it faces. Second, India must put pressure on Myanmar, not just in reconstruction of Rohingya villages, but also in creating the environment for these people to go back.

The current situation is also one where terrorist groups could try to take advantage.

And that would have a negative impact on the whole region.

Fortunately there aren’t many Rohingya who have been recruited, and we have been able to avoid the situation so far, but discrimination and unresolved problems facilitate terrorist groups.”

On reforming the UN Security Council, Guterres said, “Today’s world is completely different from the world after the Second World War and the UN must change. The security council has been paralysed in relation to many dramatic crises the world faces because all five UNSC nations must agree.”

Supporting India’s convention on international terrorism, the UN’s top diplomat said the world body had “created a special office on counter-terrorism at the UN secretariat.” UNB