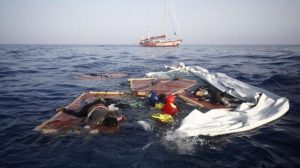 The discovery came after an Iraqi woman in wet clothes and wearing a life jacket sought help in Karaburun district, Izmir province, late on Tuesday.

She told the coastguard that the boat began to sink shortly after setting out but she managed to reach dry land.

After launching a rescue operation, the coastguard found the bodies of eight migrants, including six ashore and two still in the water.

Search efforts continued for the 25 missing, the coastguard said.

The nationalities of the other migrants were not given but Turkey hosts over three million Syrian refugees and up to 300,000 Iraqis.

The boat was thought to be on its way to Greece with Turkey usually used as a transit country by those fleeing war and poverty to try and reach Europe.

The flow of refugees into Europe has slowed since the influx hit a peak in 2015 when over a million people landed in Greece from Turkey, mainly via boats. AFP