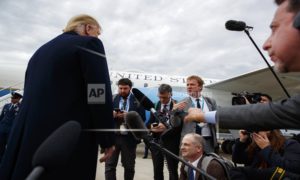 Probashbangla24 online Desk : President Donald Trump says “we would be punishing ourselves” by canceling arms sales to Saudi Arabia over the disappearance of Saudi journalist Jamal Khashoggi.
Trump says the sale is a “tremendous order for our companies.” He says if the kingdom doesn’t buy its weaponry from the United States, they will buy it from Russia.

Trump also said on Saturday that he would meet with Khashoggi’s family. But he says he has not discussed Khashoggi with Saudi King Salman as he said Friday he would do.

Khashoggi, a fierce critic of the Saudi ruling family, disappeared more than a week ago after he was last seen on video entering the Saudi consulate in Istanbul.
Published reports based on anonymous sources say he was killed by the Saudis. AP

Saudi has said the claim is “baseless.”