Transparency – the tool to counter Russia

Probashbangla24 online Desk : When Theresa May addressed MPs on 5 September – revealing the identities of two Russian agents suspected of the Salisbury poisoning – she said the UK and its allies would step up their collective efforts against the country’s military intelligence agency, known as the GRU.
In particular, she promised to deploy what she called “the full range of tools from across our national security apparatus in order to counter the threat posed by the GRU.”
Well, we now know what she means.
And the biggest tool in her box is what officials call the shining light of transparency.
West accuses Russia of global cyber-plots
How the Dutch foiled Russian ‘cyber-attack’
Russia ‘tried to hack Foreign Office’
What is the GRU?
The revelations about how the British and Dutch security agencies disrupted the operations of the GRU are astonishing in their detail and their openness.
This is not what secretive intelligence agencies normally do.
But the willingness of both countries to be so candid illustrates how determined both they and some other western governments are to try to push back against what they see as a concerted pattern of Russian aggression.
“I imagine Mr Putin is shouting at one or two people right now,” a cheerful British official told me.
‘Diplomatic success’
After the Salisbury poisonings, the British government scored a significant diplomatic success in persuading 28 countries to expel more than 150 Russian diplomats and intelligence agents.
Officials believe the scale of that joint action against Russia took the Kremlin by surprise and put them on the back foot.
The UK then went further, revealing the identities and pictures of the two Russian military intelligence officers that it believes were responsible for poisoning the Skripals.
And now, the UK and the Dutch governments have revealed a huge amount of new intelligence about how the GRU has been operating across the world, namely its attempts to hack the OPCW chemical weapons inspectors’ headquarters in the Hague, the computers of the Foreign Office in London and the work of the Porton Down military laboratories in Wiltshire.

The aim of this highly unusual openness is to counter Russian behaviour by exposing their operations to the world.
As the UK ambassador to The Hague, Peter Wilson, said, the GRU operates in the shadows so the West must do more to shine a light on their activities.
In other words, officials hope that Russia will know that if it carries out attacks like this again, there will be a price to be paid of further international opprobrium.
The revelations of the Hague operation do not just illustrate international co-operation, but also reveal the extent of western intelligence capabilities.
This shows Moscow – and other European capitals – what can be done when they are targeted by what officials describe as malign Russian activities.
‘Calling out Russia’
But as well as this rare openness about joint intelligence, what was also surprising was the scale of the international co-operation.
The UK and the Dutch held a joint press conference with their defence minister and the British ambassador, the British and Dutch prime ministers issued a joint statement, and the Nato secretary general also had a statement ready. 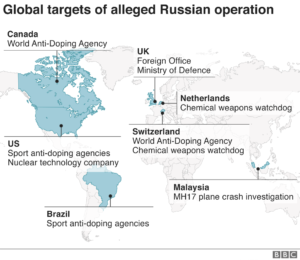 Other governments and intelligence agencies will almost certainly have had to agree to the revelation of this information.
And the United States charged seven Russian GRU officers for hacking and other crimes.
This indicates a growing international willingness to call out Russian intelligence aggression.
There will, inevitably, be limits to this cooperation.
The Foreign Secretary, Jeremy Hunt, said he would talk to allies about imposing further sanctions on Russia.
But some EU countries – like Italy – are reluctant to ratchet up the pressure on Moscow.

And some are hoping – after Brexit – to exploit Britain’s absence from the EU to weaken sanctions next time they have to be agreed.
This, though, is something that Britain hopes to avoid, for the wider message that the government wants to send to allies is that the UK will continue to cooperate with its European partners in the fight against Russian aggression after the UK leaves the EU.
UK diplomats hope their EU counterparts will have a greater sense of the important role that Britain can play in Europe’s security and defence community long after it has left the European Union. BBC